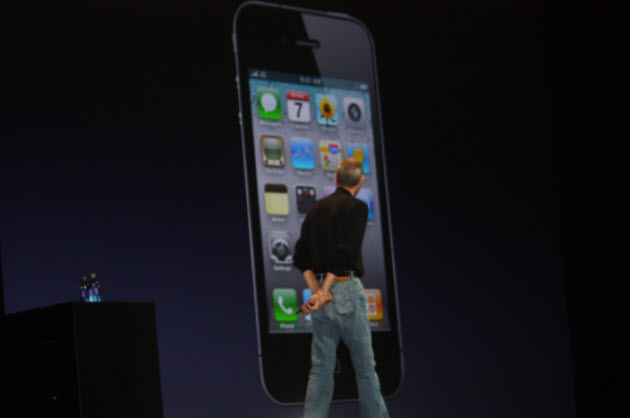 Jobs called it the thinnest smartphone ever created, at just 9.33 millimeters thick. (For those keeping score, Nokia’s E71x is 0.67 millimeters thicker.) It has a stainless-steel border on the side and it has all of its necessary radio antennae in the border metal of the phone, a feature which should improve reception.

As previously reported by Gizmodo, it has a front-facing camera as well as a back-facing camera. The glass is optimized for optical quality and scratch resistance. It has two microphones. The second adds the ability for noise cancellation, which means that the voice you hear on the phone will be more clear.

Its display measures 3.5 inches diagonally, with 960 x 640 pixels, or four times more than the iPhone 3GS because of something Apple calls the “retina display,” which packs four times as many pixels in the same space. The display has 326 pixels per inch and it uses IPS, the same display technology as the iPad.

It can handle talk for 7 hours and web browsing on 3G for 6 hours. That is up to 40 percent more talk time than on the 3GS. It is arsenic-free, BFR-free, mercury-free, and it has highly recyclable materials.

Up to 32 gigabytes of storage is available. It has an Apple-designed A4 chip as its brain, the same chip as in the iPad. It has 802.11n Wi-Fi and GPS. It also has a gyroscope, which is much more accurate than an accelerometer at detecting motion.

“I can’t wait to see what you guys can do with a gyro built into every iPhone 4,” he said to the assembled crowd of developers.

The device has a new camera system. It has a backside illuminated sensor, a way to get more photons to a sensor by getting wiring out of the way. It is a five-megapixel camera on both side, and it has a 5x digital zoom as well as an LED flash.

And the big deal about this phone: it can run live video phone calls.