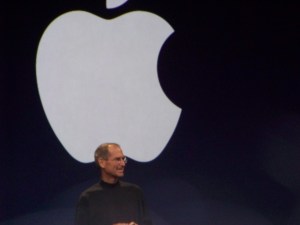 Apple’s annual WWDC developer conference has just kicked off and CEO Steve Jobs has taken the stage. The room filled up fast, and I’m here among crowds of thousands. Conference organizers have told us all to turn off our cell phones, iPhones, PDAs and paging devices. At least they didn’t tell us to turn off cell phone modems.

Jobs says there are three parts to Apple: the Mac, music, and the iPhone. He just mentioned the company will be giving us a peak at the next version of OS X called “Snow Leopard.” But first he’ll start by detailing the 2.0 release of the iPhone software. Apple started the iPhone SDK program 95 days ago and 250,000 people have downloaded it, he says. About 25,000 have applied for the paid developer program.

Jobs says there will be push email, contact, calendar, and auto-discovery features for the enterprise now, and Cisco’s secure VPN services will be built into the phone, making the iPhone much better for the enterprise. About 35 percent of the Fortune 500 have participated in the beta program for these features. (That got him the first applause of the speech, a la State of the Union polite applause).

Jobs’ talk is followed by a video of Disney execs and others, touting the enterprise features of the iPhone. Look out, Blackberry!

The SDK talk is next. They have a core operating system kernel that is the same as the basis of Mac OS X. Yes, the iPhone is a computer, with the same code, line for line, on the core OS. Sitting on top of that are core services, such as location awareness. On top of that is media support such as video playback and real-time 3D graphics based on the Open GL standard. Lastly, Cocoa Touch sits on top of that. Then there are tools like Xcode, Interface Builder and other things for developers to run and debug iPhone applications right on their Macs.

Scott the demo guy is showing how easy it is to add location-awareness to an application. Simple and easy. That’s the message. They’re starting out with some seriously geeky messages aimed right at the 5,200 developers attending the conference. As for plain old consumers, you’ll have to wait.