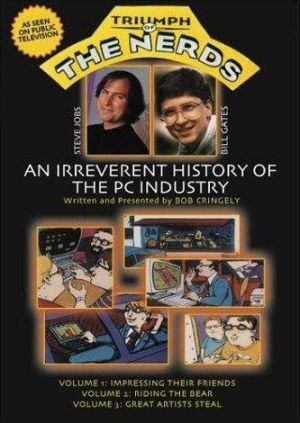 The untimely passing of Apple’s iconic co-founder and CEO has prompted the rushed release of the Steve Jobs biography, a PBS documentary and now a theatrical showing of never-seen-before footage from a 1995 interview between technology personality Robert Cringely and Steve Jobs.

Steve Jobs: The Lost Interview will debut at select Landmark Theaters on November 16 and feature nearly 70 minutes of unedited dialogue between Cringley and Jobs first captured in 1995 for the PBS miniseries Triumph of the Nerds: The Rise of Accidental Empires.

The three-part documentary series was focused around the founding of the personal computing industry, and included bits and pieces of a colorful interview with Steve Jobs in which he lambasted Microsoft and its products.

“That candid, controversial, and funny interview with an old associate … was by far the best TV interview Jobs ever gave,” according to promotional materials shared with VentureBeat. “Yet less than 10 minutes were used in the series and the other 59 minutes were lost forever when the master tapes disappeared in shipping.”

The tapes were said to be recently recovered in London. Cringley then connected with Mark Cuban, co-owner of Wagner/Cuban Companies and operator of Landmark Theaters, to bring the footage to audiences.

The unrated program will air at Landmark Theaters across the the U.S. on November 16 and 17, with 7:15 and 9:00 p.m. showtimes at most theaters. Would-be viewers can catch a screening of the program in New York, Lost Angeles, San Francisco, Berkeley, Palo Alto, Seattle, San Diego, Denver, Dallas, Houston, Minneapolis, Chicago, Indianapolis, Boston, Philadelphia, Washington D.C., Baltimore, Atlanta and Milwaukee.