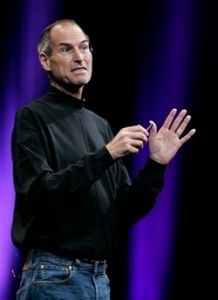 Steve Jobs announced today that he has been losing weight throughout the past year because of a hormone imbalance that has been robbing his body of proteins. He said sophisticated blood tests have confirmed this diagnosis and the remedy is a relatively simple treatment. He said his doctors expect it will take until this spring to regain his usual body weight.

” I will continue as Apple’s CEO during my recovery,” he wrote in a letter addressed to the Apple community.

Jobs made the rare public disclosure about his personal health because of the flurry of rumors set off by his decision to have Phil Schiller deliver the Macworld keynote, including stories of “me on my deathbed.” He said he decided to share the news “so that we can all relax and enjoy the show tomorrow.” Jobs has been fiercely protective of his privacy, but his health has been much discussed because of his importance to Apple.

The announcement is sure to drive a spike in Apple’s stock price since Jobs is considered the architect of Apple’s turnaround and is vital to Apple’s future. Speculation on his health has been swirling for months since he appeared gaunt at his last major Apple speech in the summer. But Apple shareholders and everyone else in the Apple community will likely breathe a sigh of relief that this condition isn’t life threatening.

Apple’s board also made an announcement in support of Jobs.
Here’s the text of Jobs’ note:

For the first time in a decade, I’m getting to spend the holiday season with my family, rather than intensely preparing for a Macworld keynote.

Unfortunately, my decision to have Phil deliver the Macworld keynote set off another flurry of rumors about my health, with some even publishing stories of me on my deathbed.

I’ve decided to share something very personal with the Apple community so that we can all relax and enjoy the show tomorrow.

As many of you know, I have been losing weight throughout 2008. The reason has been a mystery to me and my doctors. A few weeks ago, I decided that getting to the root cause of this and reversing it needed to become my #1 priority.

Fortunately, after further testing, my doctors think they have found the cause—a hormone imbalance that has been “robbing” me of the proteins my body needs to be healthy. Sophisticated blood tests have confirmed this diagnosis.

The remedy for this nutritional problem is relatively simple and straightforward, and I’ve already begun treatment. But, just like I didn’t lose this much weight and body mass in a week or a month, my doctors expect it will take me until late this Spring to regain it. I will continue as Apple’s CEO during my recovery.

I have given more than my all to Apple for the past 11 years now. I will be the first one to step up and tell our Board of Directors if I can no longer continue to fulfill my duties as Apple’s CEO. I hope the Apple community will support me in my recovery and know that I will always put what is best for Apple first.

So now I’ve said more than I wanted to say, and all that I am going to say, about this.