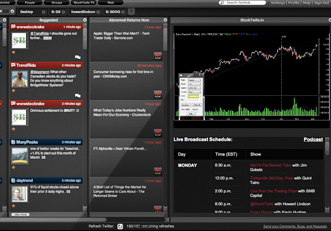 New York-based StockTwits, a site which bills itself as a real-time community for stock-market investors, announced today it has raised $4 million in funding.

The site, which started in 2008 as a simple filter for stock-related tweets on Twitter, has since expanded into becoming a popular community for investors to discuss financials and share trade ideas with each other in a real-time, Twitter-like microblogging format.

It has also received some acclaim for its desktop application, which shows a terminal-like view of user-customized financial data and information — somewhat reminiscent of a trendier Bloomberg-terminal.

Cofounder and CEO Howard Lindzon blogged about the fundraising and said the startup plans to focus on building partnerships, getting its streams and tickers across to its users in more formats, and improving representation of data on its site so users can better keep updated with the community and the financial world at large.

Back in January this year, the site acquired financial news blog Abnormal Returns for an undisclosed amount.

The $4 million venture round comes from existing investors Foundry Group and True Ventures, bringing its total funding to $8 million to date.