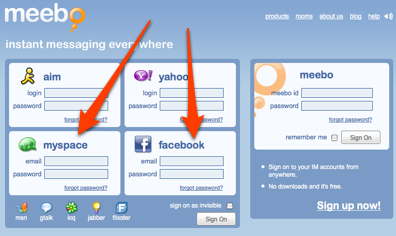 Instant message aggregator Meebo integrated MySpace’s and Facebook’s chat services last month. It let Meebo users chat with friends on either network from within its own site. Now Facebook is making Meebo turn its connection off, at least until the integration complies with Facebook’s terms.

Facebook has typically wanted close control over what third parties do with its user data, though that doesn’t appear to be the issue here. Instead, it’s apparently a security issue involving third-party software that Meebo used to implement Facebook chat. Both MySpace and Facebook offer their own chat services that turn your friends on the sites into IM contacts. While MySpace and Meebo worked together on this new feature, Meebo figured out how to integrate with Facebook’s IM protocol by itself. It didn’t work with Facebook beforehand.

This isn’t the first time Facebook has restricted a third-party that accessed its user data without its permission, though in this instance the issue isn’t data. Most recently, Facebook sued Power.com, a social network aggregator, because the site collected Facebook usernames and passwords among other things. That suit may be wrapping up. A year ago, social contact manager Plaxo scraped Facebook for emails — and got shut down. Even Google attempted to collect Facebook user data last spring for a service called Friend Connect, then suffered a takedown.

But as I wrote last month, there is some precedent for Facebook to not shut this chat service down.

So maybe Facebook will cut off Meebo from accessing its IM service? Or maybe not. Social.IM, a startup recently acquired by iSkoot, has already integrated Facebook IM together with other IM services in a desktop app — and it’s still functional. Social.IM’s service has you login directly to Facebook, and it doesn’t store your Facebook data. Desktop IM aggregator Adium and Meebo rival eBuddy’s mobile service also includes Facebook chat integration.

The Meebo company statement below, indicates that Facebook may be returning to Meebo at some point.

As a bunch of you already know (because you’ve been using it), we recently added Facebook Chat into Meebo.

We have been speaking to the Facebook team, and it turns out, they’d like us to connect to their network in a different way. In the interim, they asked us take Facebook off Meebo, and we said “okay.”

However, we were glad to hear that the Facebook team was genuinely excited to see their network on Meebo, especially since they already have plans to open Facebook Chat. They also committed resources from their Chat and Facebook Connect teams to do extra work with us to get Facebook Chat back on Meebo “really, really soon.”

Work began this week, so stay tuned. We expect some all nighters on both sides!

P.S. Meebo grew in December. We reached close to 45 million people, a new record, including 2.5 million via Meebo Community IM. So it’s not all bad news… :)