StoreDot, an Israel-based startup that makes super fast-charging batteries built on bioorganic technology, has raised $60 million in a round of funding led by Daimler’s trucking division, with participation from Samsung Ventures, Norma Investments, and a number of “financial institutions” from Israel and China.

Founded out of Tel Aviv in 2012, StoreDot currently operates across three core business units focused on mobile devices, electric vehicles (EVs), and screen displays. The company first demoed its prototype battery technology way back in 2014, showing how it could one day be possible to charge your smartphone in around 30 seconds.

When we last caught up with StoreDot, in 2015, the company revealed that the EV industry was now firmly on its radar. Fast-forward another two years, and the company has already demonstrated a proof of concept that shows how its FlashBattery technology can fully charge a car in just five minutes.

StoreDot noted that its battery tech uses “advanced nano materials, as well as proprietary organic compounds” to expedite the charging speed of EVs. The company added that these batteries are currently in “advanced stages of development” and said it expects them to be integrated into electric vehicles that are currently in the design phase.

StoreDot had raised nearly $70 million in funding previously, and with its latest cash infusion the company plans to target its fast-charging FlashBattery technology at the electric vehicle industry.

Daimler is a notable addition to StoreDot’s roster of investors. The German automotive giant recently announced plans to accelerate its EV ambitions over the next five years, and it also announced a new EV battery factory in Germany and a new $740 million EV battery plant in China for its Mercedes-Benz vehicles.

In addition to joining the funding round, Daimler is actually jumping on board StoreDot’s program as a strategic partner to “accelerate the adoption of the FlashBattery technology” in the EV market, the duo revealed in a statement.

“Having Daimler, a world leader in the automotive space, as a strategic partner is of significant value to StoreDot,” said StoreDot cofounder and CEO Doron Myersdorf. “It will accelerate the completion of our development process and the introduction of FlashBattery to the market.”

But Daimler’s immediate ambitions for fast-tracking EV battery charging lie within the trucking realm, according to Martin Daum, who serves as a board member with the arm of the company that’s responsible for trucks and buses. “Electrification of trucks is of top priority at Daimler,” he added.

While StoreDot doesn’t yet have any commercially available goods on the market, the company has announced two fast-charging battery products that are scheduled to launch by the end of the year. Without giving an indication of price, StoreDot has introduced an iPhone 7 case with a built-in flash-charge battery case that promises to get the phone fully juiced in five minutes. The company is also planning to launch a separate FlashBattery power bank with equally swift recharging capabilities. 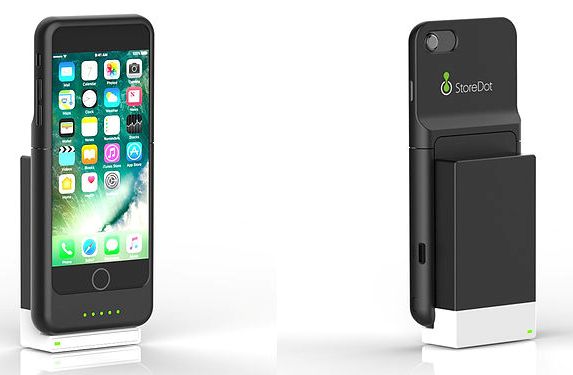 Elsewhere, StoreDot told VentureBeat that it’s working “with a number of manufacturers” — including those in the smartphone realm — to guide them through the process of making the necessary changes to their production systems to accommodate its fast-charging battery technology. “We work with thin layers of the electrodes, proprietary organic compounds, and nanomaterials that are all new to the industry,” said Myersdorf. “We’ve been engaged with a couple of leading manufacturers over the past year, and we’re making steady progress. We’re expecting to go to market next year.”

StoreDot is also planning to build its own OneGiga manufacturing facility dedicated purely to FlashBattery technology. The new facility is expected to open for business in 2022.