Flash storage firm Violin Memory has let go chief executive Don Basile in a bid to turn its fortunes around after a disappointing IPO.

Howard A. Bain III, the chairman of its board, was named interim chief executive in a press release Monday. Since the news was announced, Violin’s stock has risen just over 20 percent. 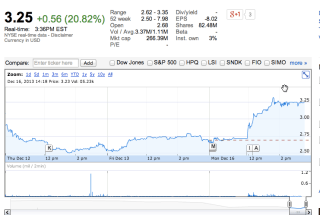 The news release confirms Bain’s appointment, but does not offer an explanation for the turnover. According to a report in AllThingsD, rumors of Basile’s replacement have been spreading for days in enterprise circles.

Having priced at $9 a share, Violin Memory opened for trading on Sept. 27 at $7.50, and raised $162 million in the process. Its shares have fallen by nearly 70 percent. Since then, the company’s performance has continued to suffer.

Violin reported heavy losses in a November earnings report, which were far lower than analysts expected. Violin’s net losses jumped to $34.1 million, or 85 cents a share, from $25.4 million a year ago.

Before its IPO, expectations were sky-high for Santa Clara, Calif.-based Violin Memory, which raised over $180 million in venture capital for its high-performance flash-based storage solution.

However, PrivCo, which analyzes private companies, recently said it is concerned at the rate at which Violin is burning through cash. PrivCo issued concerns that Violin Memory has few customers, and it is late to the flash memory party.

Indeed, the space is flooded with rivals. Violin has to compete to win customers against developers of all-flash storage arrays or hybrid flash-disk arrays, including Mountain View, Calif,-based Pure Storage, and Boulder, Colo.-based SolidFire.

Read the full announcement below.

Violin Memory, Inc., (VMEM), a leader in persistent memory-based storage solutions, today announced that Howard A. Bain III, Chairman of the Violin Memory Board of Directors, has been appointed interim Chief Executive Officer, effective immediately. Mr. Bain’s appointment follows the decision of the Board of Directors to terminate Donald Basile as Chief Executive Officer. Mr. Bain will remain Chairman of the Board.

The Violin Memory Board of Directors has initiated a search process and retained an executive search firm to identify a permanent CEO.

Mr. Bain, who has served as Violin Memory’s Chairman since August 2013 and as a member of the Board since October 2012, brings to the Company over 40 years of operational, financial and leadership expertise, having served as Chief Financial Officer at several public companies, including Portal Software, Inc., Vicinity Corporation, Informix Corporation and Symantec Corporation. He has significant industry experience having served in senior management positions at various technology companies in the areas of semiconductor devices and manufacturing equipment, laser-based large screen projection systems, and computer disk drives. In addition, Mr. Bain has served as a consultant on corporate governance issues since 2004, and is a Governance Fellow with the National Association of Corporate Directors.

David Walrod, Chairman of the Nominating and Corporate Governance Committee of the Board of Directors, said, “The Board believes this leadership change is necessary to enhance the management team’s operational focus and ability to execute the Company’s plans for profitable growth. We are, however, fortunate to have someone with Howard’s extensive operational, financial and leadership experience ready to assume the role of interim CEO at this important juncture for the Company. During his time as director of Violin Memory, Howard has gained a deep understanding of the Company’s products, customers, strategy and management team, as well as the significant growth opportunities in the enterprise memory market. We are confident that he is the right person to lead Violin Memory while we search for a permanent replacement to fill the CEO role.”

“Violin Memory is focused on maintaining the operational flexibility to manage through the emerging dynamics of our industry, with financial resources on hand to achieve our objectives. While our fundamental strategy to drive growth remains unchanged, we will pursue additional tactical initiatives to improve the overall cost efficiency of the business and improve sales leverage through our partner and indirect channels. We have a robust product roadmap in place that positions us well to take advantage of the transition to a memory-based data center and build an even stronger future for all of our stakeholders,” said Mr. Bain. “Having served as Chairman of the Board, I am well aware of the many opportunities ahead and look forward to engaging with the Company’s customers, team members and shareholders in the coming weeks. Most importantly, I am confident in our team’s ability to execute and provide our customers with the high level of support and service that they have come to expect from us.”

About Howard A. Bain III

Howard has served on our board of directors since October 2012. Since 2004, Mr. Bain has been an independent consultant in all aspects of corporate finance. Mr. Bain has served as Chief Financial Officer at several public companies including: Portal Software, Inc. from 2001 to 2004, Vicinity Corporation in 2000, Informix Corporation from 1999 to 2000, and Symantec Corporation from 1991 to 1999. Prior to that, he served as a Senior Audit Supervisor at Arthur Andersen LLP, where he was a certified public accountant.

He is also a Governance Fellow with the National Association of Corporate Directors. Mr. Bain has served on the board of directors of Nanometrics, Inc. since April 2008, Learning Tree International, Inc. since 2001, as well as Nok Nok Labs, Inc. a private venture capital financed company. Mr. Bain holds a B.S. in Business Administration from California Polytechnic University. Mr. Bain’s significant Board, operational, financial expertise, including his experience as Chief Financial Officer at several public companies, as well as his experience in various technology companies in the areas of semiconductor devices and manufacturing equipment, laser-based large screen projection systems, and computer disk drives is directly relevant to Violin’s business and his responsibilities to the Board.