It appears Heatbleed, the massive OpenSSL security flaw, never really mattered much to the masses.

For all the shouting from the tech and security industry, a large portion of Internet users remain entirely indifferent to the bug. 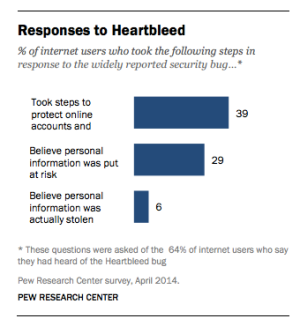 As with all studies, Pew’s research should be taken with a speck of sand. Studies such as these can successfully suggest trends, but the data within them shouldn’t be interpreted as hard fact.

It’s curious, however, to see that Heartbleed — a bug famous for striking mainstream fears — isn’t as widely cared about as techies may believe.