StumbleUpon, an application for discovering and rating web content, is fine tuning its web experience. As part of the app’s growth outside of its proprietary toolbar, StumbleUpon is announcing updates to its web-based interface, like Facebook compatibility and new content sharing tools.

In general, StumbleUpon works as a recommendation engine for web pages. Previously, users had to install a toolbar to rate sites (either with a thumbs up or down), or recommend them to other StumbleUpon users. Ultimately, the service aggregated users’ ratings (and their friends’ suggestions) from the toolbar to recommend similar sites of interest. Eventually, StumbleUpon opened up its recommendation engine by launching a web-based version of the app, and today’s update represents an incremental push towards combining the two. 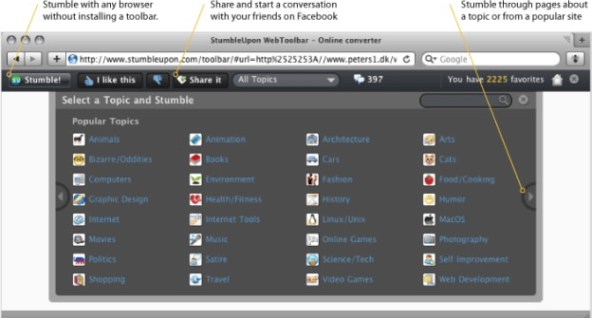 Like before, users can log in through the web page and access all of their preferences from any computer or web browser. Except now StumbleUpon lets users share recommended sites with their Facebook friends, while also providing a rudimentary comment feature for discussing rated sites with other users. So, if a user wanted to share/razz a recent news story about swine flu hysteria, they can tackle both tasks from within StumbleUpon’s new interface.

Of course, even though this is an incremental step, it’s clear that the goal is to make the service more social. StumbleUpon already uses its vast swaths of user data to deliver targeted ads, and the changes to the new web-based platform could trigger a new influx of data — especially since it allows users to access the service across multiple platforms. As a service whose lifeblood lies in the user-submitted endorsements of web content, it only makes sense for StumbleUpon to grow its business in this fashion.