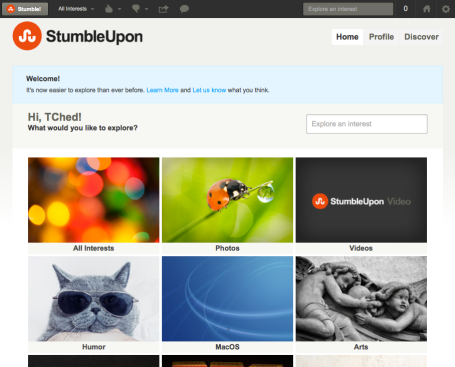 Link discovery service StumbleUpon will be rolling out a major update today, the first in nearly a decade, that cleans up the site’s user interface, revises the site’s design and adds a new channel feature.

“The changes reflect what our users are looking for [when they] have some free time and … want to be entertained,” StumbleUpon founder and CEO Garrett Camp told VentureBeat.

StumbleUpon’s service lets people discover and share new web content based on a broad spectrum of categories. Users click a “stumble” button to discover new content and then have the option of voting and commenting on the selection. In October, the company announced that it reached 20 million active users and had over 1 billion “stumbles” per month.

The first thing users will notice about the redesign is the logo. Gone is the familiar blue and green “SU” logo, which has been replaced with a simple orange circle with a more elegant “SU” design.

The site’s user interface also got an overhaul. The Stumble bar — which serves as the service’s main navigation tool — has far fewer buttons, which makes the voting buttons much more prominent. The Stumble button is first on the bar, followed by the selected category of link discovery, voting buttons, simple share and comment icons and the name of the user who submitted the link. The bar also has an integrated Explore Box, a feature StumbleUpon added back in August that allows users to search for more specific categories.

Another significant update is the addition of Stumble Channels, which is a way to directly explore content from sites, celebrities and brands. There are currently over 250 channels, which have been hand-picked and authenticated by the StumbleUpon staff to assure quality. Each channel is curated by the celebrity or brand, but it exists separate from the overall discovery algorithm. Eventually, the channel feature may be rolled out to all users, who may wish to create a specific channel for their band, website, etc.

Overall, the changes indicate that StumbleUpon is keenly aware of its active user base. Unlike Delicious or Digg, StumbleUpon isn’t trying reinvent itself in an attempt to grab new users and/or higher levels of engagement. The site has a healthy level of both user growth and activity.

All StumbleUpon users can try out the revamped site as of today.

StumbleUpon was acquired by eBay in 2007, only to be bought back two years later by original founders Garrett Camp, Geoff Smith and Ram Shriram, as well as Accel Partners and August Capital. StumbleUpon now operates as an independent company. The company closed a $17 million round of funding in May 2011 and has raised $18.5 million total funding to date.