Zooomr, the photo start-up that has galloped ahead of everyone else in offering edgy photo tagging and sharing techniques, is about to release its latest feature: Zmail.

Zmail, an internal messaging system for the site, will let users notify their friends or groups of the photos they have taken — letting users avoid having to jump to an email client like most photo sites require. Zmail may not be a remarkable invention by itself, but is the latest in a series of features that makes Zooomr stand out for the sheer amount it has been able to do over the past year, on the backs of one and a half people. Its “Portals” feature is intriguing, and we’ll get to it shortly.

Founder Kris Tate (pictured here), who is 18, gave us a tour of the site’s latest goodies yesterday, and our head was spinning. He and ace photographer Thomas Hawk, who works part time at Zooomr, pushed geo-tagging early, have raised a mere $50,000 from angel investor Ron Conway. Lean and low-burning, they have mobilized a bunch of loyal tech fans who are helping translate Zooomr’s site into other languages — giving Zooomr strong momentum in places like France and Japan. That has helped Zooomr surge ahead in areas like geo-tagging (geo-tagging is a feature that lets you stick your photo on a map so that you and your friends, and others, can see it — letting you follow your friends’ activities during the evening, for example, or while on vacation). Zooomr uses Google Maps, which is more advanced in France or Japan than Yahoo Maps — which is the map system industry leader Flickr has to use because it is owned Yahoo.

If you are new to Zooomr, we recommend you sign up and stroll through it. Everything bespeaks of new, even the sign-up system, which lets you sign up with “openid” — a URL identity system worth a look in itself. And this is the challenge Zooomr faces. Will it surge so far ahead of where people are today that it will alienate regular users like you and me who are now only beginning to appreciate the full beauty of Web 2.0 leader, Flickr? Will it take a couple of years before it fully figures out how to make money off of these features? We don’t know, perhaps. But check out some of the features:

Thomas Hawk (pictured here), who was an avid user of Flickr — and still is, for many of his featured photographs — said he got frustrated by little things, such as Flickr’s refusal to provide something as basic as “trackback” information on photos. An accomplished photographer, Thomas wants to know who on the web is linking to his photos. His concern is less for copyright reasons, more about the joy of wanting to know who is appreciating his photos, he said. Flickr wouldn’t do it. One day, Kris Tate asked Thomas what dream feature Thomas would like to have. Thomas suggested trackback, and while they chatting some more, Kris fiddled on his computer, and built a trackback feature within an hour, Thomas said.

Our featured image above is of the Golden Gate Bridge, taken by Thomas. The photo is hosted on this page within Zooomr. You may have to be registered to see the full features on the page, but you will see trackbacks on the bottom. Other features let you see pictures taken of the bridge by other people, because Zooomr clusters photos according to tag and location. It has 50,000 such markers around the globe, such as airports, ocean buoys, and so on — all user generated, and the number is growing.

Kris’ vision is to let you discover and share the details and other data within an image. Take, for example, Kris’ new “Portals” feature. If you click on the image below, you will be taken to Zooomr’s demonstration of a way to embed photo images within images, so that others can see more details than they otherwise would. These embedded images are outlined in a box within the original, and you can see them as you hover over a photo. Here you will see he has taken a picture of a freeway. Within that picture, he has a box, or portal, that lets you enter another image of the freeway sign details, letting you pan around on those details and see them clearly even though they are too far away to see in the initial image. 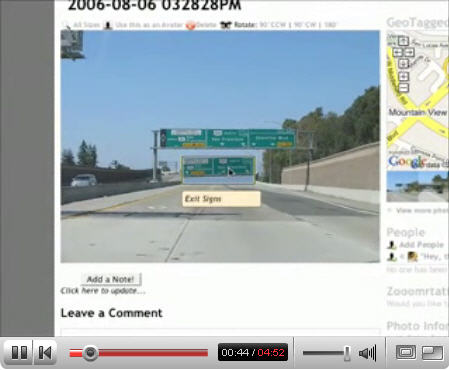 He has added audio to these “portal” embedded images, and you will see in the demo an example of a soft-drink machine humming at the Googleplex — within the photo.

Zooomr also gives you a way to leave advanced “notes” on images, color-coded according to friend status (green for a friend, blue if it is yours, etc) and tagging photos with a person’s Zooomr username if you hover over them with your mouse.

There is much more, such as a way to build “smartsets” that is in many ways more sophisticated that Flickr’s organizer and sets technology. You can select “Thomas Hawk” and “Golden Gate Bridge,” and then create a smartset that searches for all of the photos with those two tags, and then you can label it say, “Thomas Hawk’s photos of GGB.”

With several hundred photo sites existing today, there is no doubt this company will have a hard time finding a business model in the short-term. But its features are fascinating.