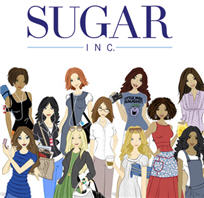 Sugar Publishing, a network of woman-focused blogs, has acquired woman’s social shopping site ShopStyle, the latest deal in a fierce competition by a triad of companies hoping to become the leading woman’s Web destination. The amount of the transaction was undisclosed.

San Francisco-based Sugar is a relatively small network of content-oriented sites, but is backed by NBC and the respected and ambitious Silicon Valley venture capital firm Sequoia Capital. Previously, we’d assumed Sugar trying to make inroads against two giants: incumbent iVillage, and the fast-growing upstart Glam. Glam, also of Silicon Valley (Brisbane, Calif.) has accelerated past iVillage and now claims it’s the largest woman’s network, at 21 million unique viewers. That compares to 1.2 million uniques for a combined Sugar and Shopstyle, according to MediaMetrix. iVillage has 15 million.

However, Sugar chief executive Brian Sugar now says he no longer sees Glam as a competitor. The two have continued to move in opposite directions, with Sugar focused on publishing content, and Glam focused on becoming a large ad supplier, he said. By selling ads on multiple sites, Glam is understandably going to have larger user numbers. It counts users from sites it doesn’t completely own, but which take advertising from Glam.

Sugar’s numbers have, in fact, declined from 1.3 million to 1 million in August, while ShopStyle declined from 206,000 to 188,000 uniques in August, according to Comscore. August is a slow month for many Web sites, becaus of summer vacation, so it’s too early to say whether the sites have stalled, or whether its just a blip on a path toward further growth. See graph below.

Sugar has continued to dismiss Comscore’s numbers, however, saying his internal data show the combined Sugar and ShopStyle attract more than 5 million unique users monthly. He says Comscore doesn’t include some of his sites, and that his internal numbers show traffic up in August.

The controversial Glam, led by entrepreneur Samir Arora, says it’s the fastest growing network on the Web. We just reported on its redesign, which includes a Digg-like feature. It has focused its efforts more on ad sales lately, hiring new sales executives like Karin Marke, who ran Fox/MySpace’s west coast sales, and Jennifer McLean, from Fox and DoubleFusion.

Earlier, we reported Sugar would soon announce its own network with advertising firm Federated Media. The thinking for that network was because Sugar didn’t have its own ad network, nor a significant shopping component — both areas where Glam is strong. By buying Shopstyle, another Silicon Valley company (Los Altos, Calif.) which lets women browse fashion products and create style books, Sugar also puts a stake squarely in the shopping-branding arena.

However, Sugar’s deal with FM, which was to have been called Sugar Network, has been scuttled. Sugar tells us that while the plans had once been firm, Sugar reconsidered several weeks ago after concluding the industry doesn’t need another network. It has become “commoditized,” said Sugar, meaning there is less money in the ad network model than meets the eye. “There’s a lot of hype,” he said. “It wasn’t going to move the needle.”

Insiders tell us that Sugar, FM and Glam have been “in play” recently. Large companies are looking to buy the private companies before they become too big. Glam, which is raising a warchest of $200 million, has been approached by several large companies. Glam itself had once considered acquiring both FM and Sugar. Meanwhile, Time Warner has reportedly been in talks to buy FM. FM chief executive John Battelle declined comment about Glam’s offer, and about talks with Time Warner. Arora won’t comment on acquisition talks, either.

Separately, Sugar also said it will change its name to Sugar Inc.

Sugar said it will soon add ShopStyle “widgets” on Sugar’s blogs that allow readers to shop.

Shopstyle had angel backing, but the names and amount invested were undisclosed.

One notable anecdote: We first wrote about the four companies — Glam, iVillage, Sugar and Shopstyle — as being in a race back in June. Sugar tells us that VentureBeat story sparked a conversation between Sugar and Shopstyle which eventually led to the acquisition. 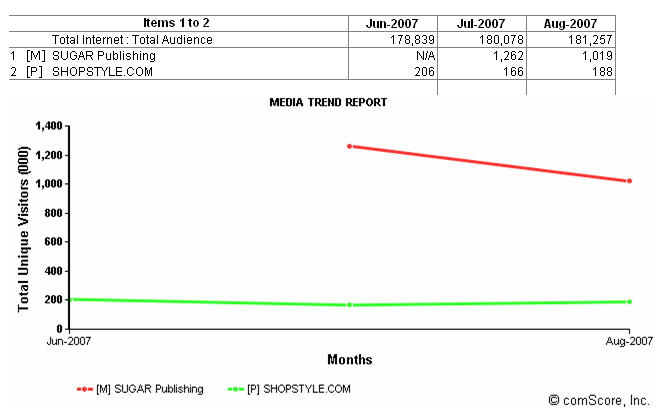