Gaming brands just reduced spend for the third month in a row, dropping to an estimated $6.2 million in July from June’s $8.7 million. Once again Nintendo dominated with over 60% of the industry’s total outlay, followed by Rockstar Games with nearly 36%. 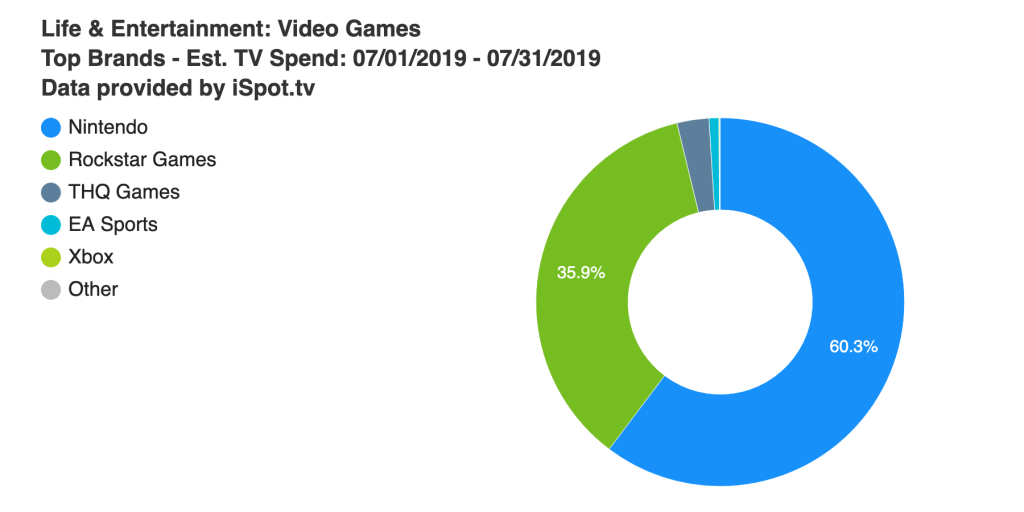 GamesBeat has partnered with iSpot.tv, the always-on TV ad measurement and attribution platform, to bring you a monthly report on how gaming brands are spending. The results below are for the top five gaming-industry brands in July, ranked by estimated national TV ad spend.

Nintendo leads thanks to its estimated spend of $3.7 million on nine ads that ran nearly 2,200 times, generating 383.6 million impressions. The commercial with the biggest placement budget (est. $900,787) was “Super Mario Maker 2: Level of Your Dreams.” Nintendo prioritized spend across networks including Nick, Teen Nick, and Nick Toons, and during shows such as SpongeBob SquarePants, The Loud House, and iCarly.

At No. 2: Rockstar Games, which spent an estimated $2.2 million on a single spot, “Grand Theft Auto Online: The Diamond Casino & Resort “Open for Business,” that aired 88 times, resulting in 48.1 million TV ad impressions. CBS, NBC, and FX were three of the networks with high spend, while top programs included The Late Show With Stephen Colbert, The Tonight Show Starring Jimmy Fallon, and The Late Late Show With James Corden.

THQ Games takes third place with an estimated spend of $172,985 for two ads that aired 60 times and generated 4.2 million impressions. The majority of spend (est. $170,004) was for “All You,” promoting MX vs ATV All Out. THQ Games focused its budget on just three networks: NBC, Mav TV, and NBC Sports; programming with the most spend included IndyCar Racing, Motorcycle Racing, and Motocross.

Fourth place goes to EA Sports, which spent an estimated $53,274 on placing one commercial, “Bring it in” for Madden NFL 20, featuring Patrick Mahomes and JuJu Smith-Schuster. It ran 66 times, resulting in 12.9 million impressions. EA Sports prioritized reaching a sports-loving audience, with top networks including ESPN, NFL Network, and ESPN2; among the programs with the biggest budgets were SportsCenter, First Take, and Get Up.

Xbox closes out the ranking with a modest estimated spend of $4,448 on placing a single ad, “Gears 5: Terminator Dark Fate Reveal,” that aired six times and generated 1.3 million impressions. The spot only aired on TBS during ELEAGUE.