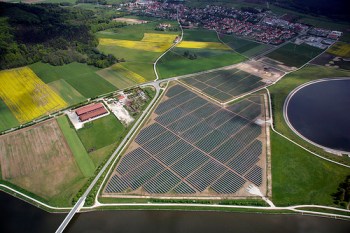 Total, a French oil company, announced today that it will purchase a majority stake in solar panel manufacturer SunPower for $23.25 per share — bringing Europe’s third-largest oil company into the growing and hyper-competitive solar panel business.

First Solar now stands alone as the last major independent manufacturer of solar panels in the United States. Solar panel manufacturers have faced stiff competition from Chinese companies that are able to compete with much lower costs, forcing U.S. companies to either seek large amounts of financing — typically in the form of huge guaranteed loans from the Department of Energy — or sell off to larger energy companies.

SunPower specialized in photovoltaic panels that were highly efficient, but a little more expensive than other solar panel manufacturers. Solar panels capture sunlight and convert it to electricity, but usually capture only small amounts of the sunlight that hits the panel. SunPower’s cells can capture around 24 percent of the light hitting the panel and convert it to electricity — compared to FirstSolar’s 11 percent efficiency ratings. SunPower specializes in wafer-style solar panels, while FirstSolar and other major competitors produce thin-film solar panels that can be placed on any surface and have lower manufacturing costs.

Total will buy 60 percent of SunPower for around $1.4 billion, valuing the company as being worth around $2.3 billion. SunPower currently has a market cap of around $1.45 billion — so the deal represents a 58 percent premium over its current market price. Shares of SunPower were up around 40 percent to $22.15 in extended trading after the deal was announced.