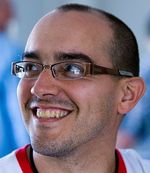 Dave McClure, a “super angel” and founder of the seed stage startup fund 500 Startups, has writtten a profanity-ladened post in which he admits he was at a secret dinner that Techcrunch editor Mike Arrington barged in on. But McClure denied Arrington’s allegations that there was any collusion among the angels to hold startup valuations down.

“Unfortunately I probably have more balls than sense, but it drives me f****** [we cleaned up his language a little] insane to see some bull**** superangel conspiracy theory get whipped into a frenzy by people who weren’t there, have no idea what the hell was discussed, and are ready to believe anything when someone yells FIRE!,” McClure wrote.

McClure said he considered Arrington to be a friend, but he said Arrington was “dead f****** wrong” about the collusion which makes for “great red meat on Techmeme and Twitter, but it’s just so much horse****.”

McClure said the agenda at the dinner of super angels, as well-heeled investors with their own startup funds are called, was to discuss the latest and greatest in tech startups and get together for “drinks, good food and shooting s***.”

He said that Paul Graham and his Y Combinator incubator are doing great now in starting new companies. Arrington alleged the group was alarmed at the growing valuations of Y Combinator’s startups. McClure said there was kvetching about problems for investors, but there was also talk about how to help startups flower in new regions, expand mergers and acquisitions, and improve innovation. McClure said his firm invested in a bunch of the recent Y Combinator startups anyway because it was like a Mercedes Benz.

He noted, “Of course, none of that s*** is nearly as sexy or exciting as how we’re going to screw over some n00b startup founder at YC, beat the crap out of some clueless old dinosaur VCs whose IRR sucks a**, or hide our secret tinfoil cabal / conspiracy at Bin 38 from the Valiant Fourth Estate.”