Microsoft hopes that it has a new mascot character with Lucky, the star of Super Lucky’s Tale. The game from Playful is a sequel to the virtual reality title Lucky’s Tale, and it debuts on November 7, on the same day that Microsoft launches the Xbox One X video game console. I played it hands-on at a Microsoft preview event, and I saw its potential in appealing to a wide range of gamers who love platformers.

Playful, the McKinney, Texas-based studio headed by Words With Friends co-creator Paul Bettner, created Lucky’s Tale as a flagship platformer for the Oculus Rift headset in the spring of 2016. But VR sales haven’t been as good as predicted, and VR studios like Bettner’s have to find a new source of revenue. That played into Microsoft’s own need to have a platform character like Mario to lead the charge into the Xbox One X generation.

Playful used the VR character and his world for a 2D-screen platformer. Super Lucky’s Tale is a full-blown sequel to Lucky’s Tale, and it represents a chance to get Lucky in front of a lot more gamers, said David Calkins, head of marketing and communications at Playful, in an interview with GamesBeat. While Playful still believes in VR, games for the Xbox family could do a lot more to bring in revenues a lot sooner. 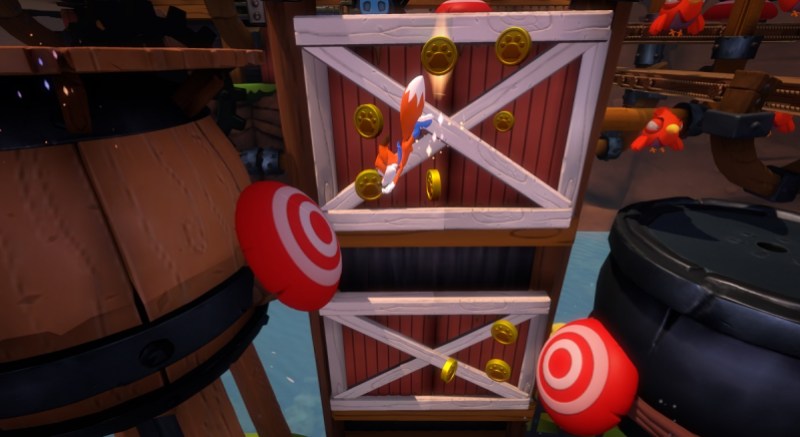 Above: Super Lucky’s Tale has a lot of platform puzzles to solve.

I played a level that came relatively early in the game. It was a fairly open level, where you could choose various different paths to pursue. Playful refers to the game as a “playground platformer,” where you can sample many different styles of gameplay in a variety of levels. You play as Lucky, the energetic and lovable fox with a big tail that he swings around in circles to zap bad guys and pull off tricks. He is on a quest to help his sister rescue the Book of Ages from Jinx, a scheming villain who is trying to reshape the world.

“We’re adding more story and characters to the game and show off the capabilities of the Xbox One X,” Calkins said. “The first game was simpler in its artistic style. If we did the wrong thing in Lucky’s Tale, we had to optimize it so it didn’t make you motion sick or put you in a difficult point of view.”

Lucky meets friends and allies along the way.

It’s a fairly gentle adventure for all ages. While the earliest tasks were very easy, the level became progressively more challenging over time. At first, you simply try to jump and swing your tail to collect gold coins. But later on, you had to jump at exactly the right time and stay out of the way of moving objects. You have to bounce back and forth between red target bumpers, and that takes a bit of skill. But at no time did I encounter challenges that stopped me dead in my tracks, as I did with Cuphead. Parts of the game seemed very tame. But others required a little skill.

I died somewhat frequently, but I got through most of the quests without too much difficulty. The first time I tried something, I usually succeeded. But occasionally I would get thrown for a loop. During one part, I had to avoid these slow-moving projectiles by moving up and down some vertical platforms. If I didn’t get the timing right, I could get trapped and hit by the projectiles. It took me a little while to get through that.

Each chapter in the game has its own style. Each chapter has an open hub where you can access all the different levels.

“You never know what you’re going to get,” Calkins said. “There is quite a bit of diversity, and I think people will be surprised at how much variety we crammed into the game.”

The game costs $30, and it will be out for the whole Xbox One family and Windows 10 PCs. The game supports Xbox Play Anywhere, where you can pick up where you left off on another Xbox One device or Windows 10 PC, bringing all your saves, game add-ons, and achievements with you. As for VR, Playful still has big dreams. And if Super Lucky’s Tale is a hit, the company will have a lot more money to experiment with VR.