Here’s SuperData’s top 10 top-grossing games on each of those platforms: 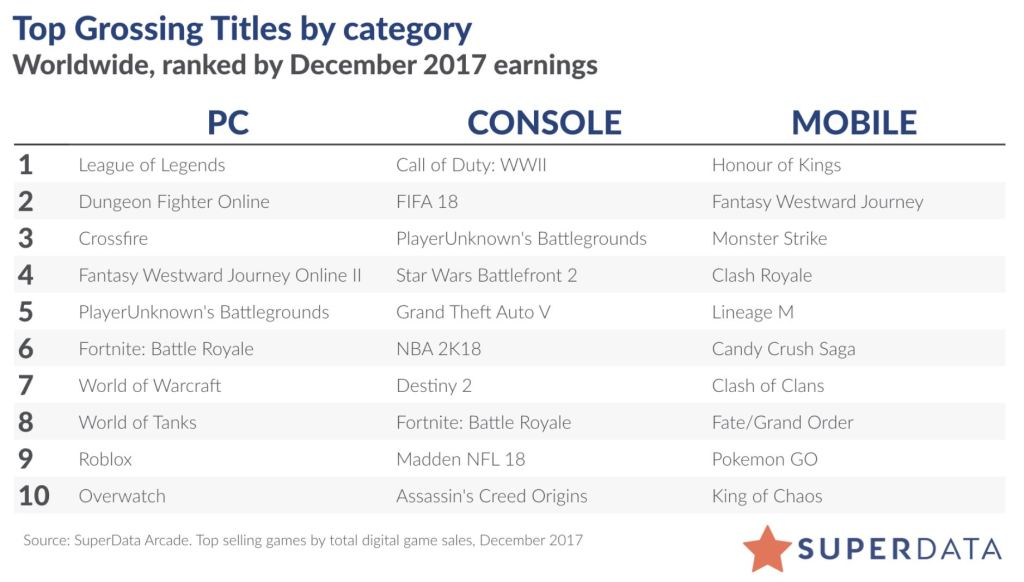 While a lot of familiar favorites continue to perform well, some of the new games or entries in a franchise delivered in a big way in December. PlayerUnknown’s Battlegrounds, the battle royale shooter from PUBG Corp., surpassed 2 million digital copies sold in December on Xbox One alone. Fortnite: Battle Royale, PUBG’s biggest competitor, generated $89 million in revenues last month.

“Epic Games’ entry into the Battle Royale arena continues to reach new heights on both console and PC, with a close-to-even audience split on both platforms,” reads SuperData’s report.

But while the last-player-standing games are moving up the charts, Call of Duty and Grand Theft Auto continue to set records.

“The new Call of Duty had the best quarter of digital unit sales ever for a console title,” SuperData’s report reads. “[And] GTA V Online broke its previous revenue record back in June 2017, making it the title’s best month to date for its multiplayer segment.”

It’s probably worth noting that Star Wars: Battlefront 2 is on this chart at No. 4, and that was all due to its full-game downloads. Battlefront 2 no longer supports in-game digital purchases, but it had a strong last month of the year thanks to the release of Star Wars: The Last Jedi in theaters.