Digital games and interactive media grew 13 percent to $119.6 billion in 2018, partly on the strength of Epic Games’ Fortnite, which itself generated $2.4 billion in the year, according to market researcher SuperData, a division of Nielsen.

Meanwhile, SuperData said that share of immersive technology revenue coming from augmented and mixed reality (AR/MR) grew from 27 percent to 35 percent in 2018. AR and VR are expected to grow to $11.5 billion in 2019, up from $6.6 billion in 2018.

Fortnite generated the most annual revenue of any game in history and popularized video game viewing among mainstream audiences. But Asia was strong, with seven of the top 10 games in 2018 and 62 percent of overall free-to-play revenue.

Red Dead Redemption 2 earned $ 516 million during the year, a big accomplishment since went on sale on October 26. Overall, premium games grew 10 percent to $17.8 billion in 2018. The title is expected to continue adding to the market in 2019 through further monetization of its multiplayer mode, Red Dead Online. 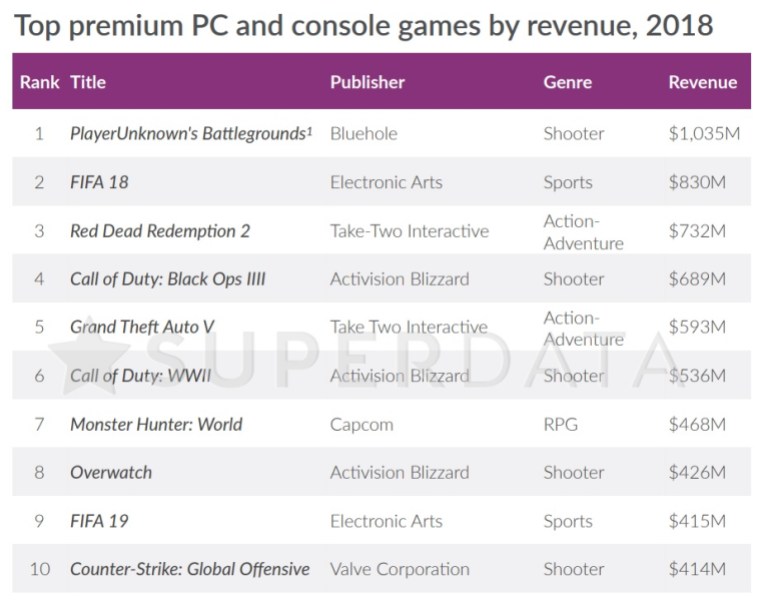 Above: Top premium PC and console games in 2018.

Meanwhile, interactive media generated $5.2 billion in game viewing content, as viewership crossed 850 million viewers. Twitch had a smaller audience than YouTube (183 million versus 594 million), but it generated more revenue since Twitch draws more dedicated viewers who spend directly to support their favorite creators. Donations and channel subscriptions accounted for 32 percent of video revenue on Twitch compared to only 9 percent on YouTube. 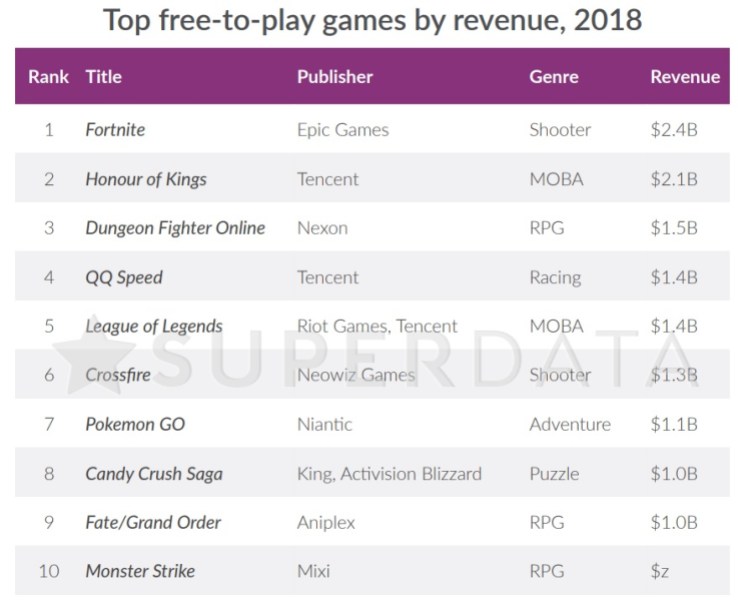 Augmented reality, mixed reality, and virtual reality revenue rose from $4.5 billion for hardware and software in 2017 to $6.6 billion in 2018.

Oculus Go and other standalone devices appealed to everyday consumers even as shipments of PCs and mobile headsets like Samsung Gear VR contracted.

SuperData predicts that more games are set to go multiplatform in 2019 while consumers will expect to have access to the same games across PC, mobile and console. That being said, competition among storefronts means publishers and developers will receive a greater share of the $38.3 billion spent on PC games.

Finally, improvements in internet infrastructure will clear cloud gaming for takeoff and a continued rollout of 5G networks will also expand where and when users can play games in the cloud.