Last year saw the launch of several high-end VR headsets complemented by new mobile offerings. The report, titled “Can’t Stop Won’t Stop: 2016 Mobile and VR Games Year in Review,” is a compilation of information Super Data and Unity Technologies, though we clarified with Unity that they did not contribute to the estimates for VR headset data in the report.

The report estimates 4.5 million Gear VRs were sold through last year. Clocking in at number two on the list is the PlayStation VR with sales “approaching a million” by the end of 2016. This leaves Oculus, Google and HTC to split about a million units. According to this report, HTC’s Vive edged out Facebook’s Rift selling “more than 400K at its $800 price point.”

The report also notes “Oculus has shown a strong interest in gaming and social applications so consumer penetration will be more important to the Rift. Meanwhile, HTC Vive is becoming the device of choice for enterprise developers. …” 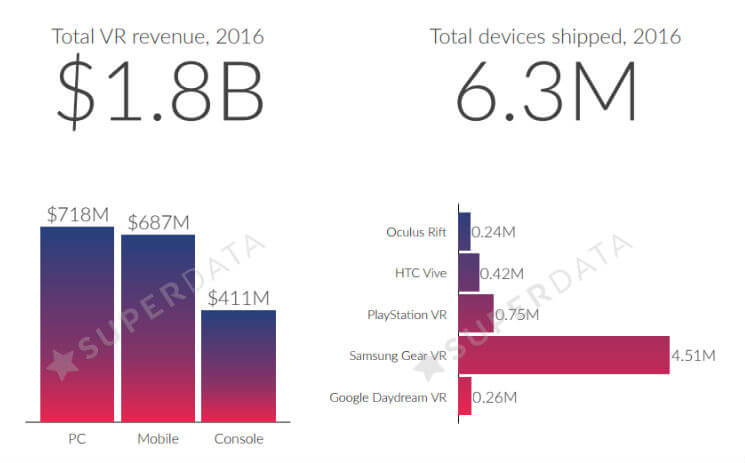 We won’t know official numbers until manufacturers themselves start releasing more solid information. Samsung is the only company to have released actual numbers, saying 5 million Gear VR headsets have been sold so far. Last November, before the figure was released by Samsung, Super Data estimated the company would sell far fewer headsets in 2016. This gap between Samsung’s and Super Data’s numbers highlights how different the figures in this report could be from the actual sales numbers. Here’s how Super Data says it arrives at its numbers:

“Every month we collect spending data on millions of unique online gamers directly from publishers and developers, totaling 50+ publishers and 450+ game titles. We combine the digital point-of-sale data with quality consumer insights to speak to the ‘why’ of the market. We clean, aggregate and analyze these data to establish market benchmarks and models for all segments of digital games and interactive media. Our research covers everything from worldwide genre benchmarks to title-level KPIs, country-level deep dives and brand equity. The mobile and VR studies were based on the following: 49 million unique transactions from 15 million unique gamers between January 1, 2015 and December 31, 2016, a survey of 1,000 U.S. mobile gamers from July 2016, data collected from partners in the VR Data Network.”