Facebook’s Oculus Quest wireless virtual reality headset will have 50 titles when it debuts in the spring of 2019. And one of those is Superhot VR, the slow-motion shooter game developed by Superhot Team for the Oculus Rift, HTC Vive, and PlayStation VR devices.

The original game was designed to be played while standing in place. The game is frozen in time until you move. And when you do, the red enemies start moving toward you in slow motion. You have to do something to get out of the way of their attacks and maneuver yourself into a position where you can attack them. 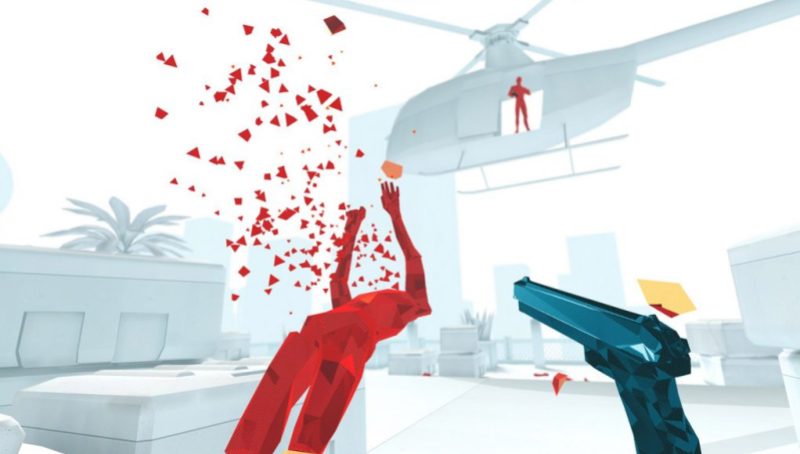 It took a while to reset the Quest so that I could play it. But once I was in, the experience was immersive. I wore the VR headset in a large open space at the Oculus Connect 5 event in San Jose, California. My hands held the redesigned Oculus Touch hand controls. Once I saw the first red enemy, I sidestepped physically out of the way, triggering the enemy’s own movement. Then I took a swing — by swinging my arm in a physical motion — at his head and shattered him. I reached out to touch a triangle and I advanced to the next level.

In the next level, I had to pick up a gun and shoot at two different enemies coming from different directions. It was a puzzle that became more complex with each level. The Oculus Quest has no wires, so I was able to manuever freely in any direction. Once, I got too close to the wall and my minder had to protect me. But the Guardian sensor system also shows you a blue grid when you are too close to a wall.

I enjoyed the freedom of playing Superhot VR on the Quest, as if it were meant to be played that way.

The $400 Oculus Quest will debut in the spring with titles like Vader Immortal: A VR Story Series.