The search engine revolution continues to ripple through to other parts of the business economy.

SupplyFrame, of Pasadena, Calif. is the latest to offer a specialized search engine for electronic components — and is also offering useful widgets about those components to embed in spreadsheets or Web sites. It has raised $7 million in a second round of funding.

Companies spend $11.6 billion annually in the U.S. to market electronic components, including to influence decisions around design and selection, the company said.

So far, designers, manufacturers and procurement managers have relied on a mishmash of imperfect ways to search for components. They start with a Google search, may consult with eBay, or contact a player such as Partminer.com, which tries catalogs parts and tries to resell them. But searchers have no way to find dynamically updated component specs, pricing, market pricing trends and key vendors all in one place, explained Steve Flagg, chief executive of SupplyFrame

Another player is Octopart, which also lists specs and compares price, and is backed by YCombinator. It lists parts from Allied Electronics, Digi-Key, Mouser, Newark InOne and more — and has partnerships with some of them.

SupplyFrame has also built relationships with component companies, but gets all its information directly from them, and does not scrape information from Web sites like Octopart does, according to Flagg. SupplyFrame launched its new site in January, and will get a million searches monthly by the end of this year, Flagg predicts. This is a niched market. There are about 2.5 million design engineers in the components industry, making design decisions and influencing about $4 billion $400 billion in spending on components, he said.

The company has been around since 2003, and restarted a year and a half ago when its first strategy — selling business process automation software — foundered. It raised $5 million for the restart, from Clearstone Venture Partners and Arcturus Capital. The latest round includes those investors, and was led by USVP.

See screenshots below for an example of a search for a part called “MAX232.” You can click to see more details about the results. Arrows below show how the site carries the part’s specs, four quarters of pricing, identical components and key vendor information. Compare this to a search on eBay for the same thing

We noted a few bugs on SupplyFrame. After initially being able to search through on results, we were hit by error pages on later tries.

The site plans to make money from targeted advertising.

It also offers a widget: Designers and other industry folks can download a software that allows them to mouse over a part listed in a spreadsheet, which calls up a widget with the latest spec and pricing information. See below. This can also be embedded on Web sites. 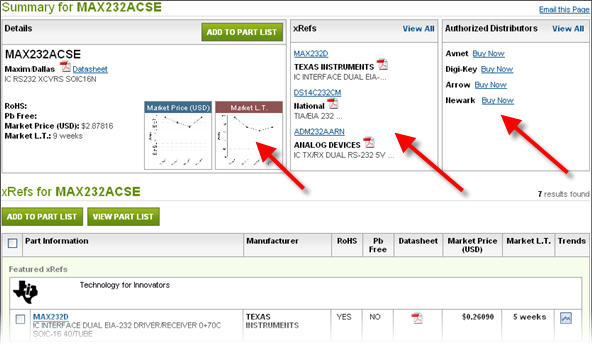