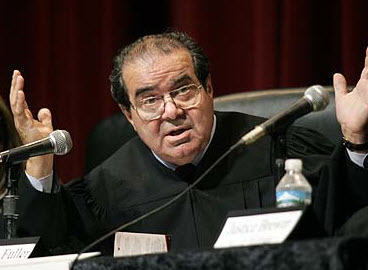 The U.S. Supreme Court justices appeared to favor the video game industry today during oral arguments about whether to uphold a California law that makes it a crime to sell violent video games to minors, according to journalists who attended the hearing.

The case is the culmination of a five-year legal battle in California. The state’s Attorney General Zackery Morazzimi said that the “deviant level of violence that is presented in a certain category of video games” requires legal restrictions to protect children.

But Justice Antonin Scalia (pictured top) almost immediately interrupted, pointing to Grimm’s fairy tales and saying, “So are you going to ban them too?”

On the other side, the judges asked the video game industry if it would accept any law that would limit the exposure of kids to potentially harmful games, including lesser restrictions such as putting violent video games on the top shelf at a store.

“Imagining a game that allows a player to torture babies,” Justice Stephen Breyer asked. “Why isn’t it common sense for the state to say ‘Parents, if you want your 13-year-old to play it, you have to buy it?’

Chief Justice John Roberts said that some games allowed users to decapitate people, urinate on them and set them on fire. (He was referring in particular to Postal 2, which the California lawyers have repeatedly pointed to for its extreme violence.)

“We protect children from that,” Chief Justice Roberts said.

Paul M. Smith, arguing for the industry trade groups the Entertainment Software Association and the Entertainment Merchants Association, said the California law was an overreaction to a new medium and the law was similar to past attempts to protect kids from crime novels, comic books and music lyrics. He said a voluntary ratings system has worked well and parents can stop their kids from playing certain games.

The video game industry can’t celebrate just yet, as the court’s questions clearly spell out the competing interests in the case. Outside the court, video game fans demonstrated at a rally, pictured below. 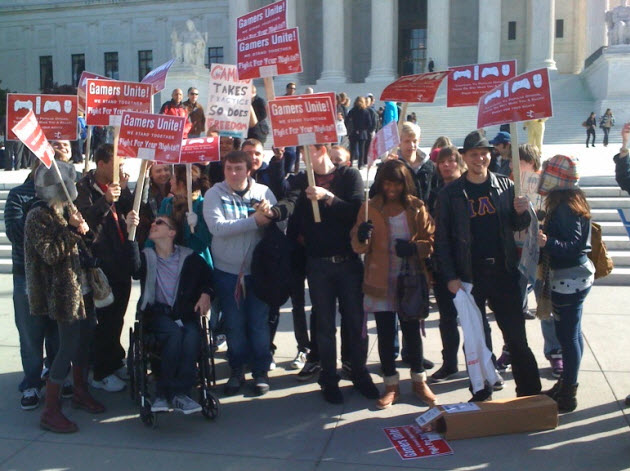