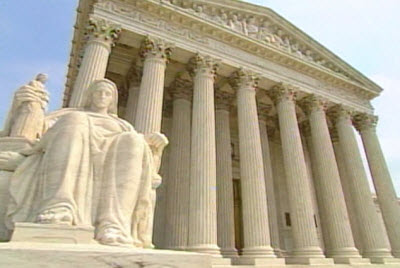 The state law restricted the sale or rental of violent video games to minors, but the court upheld a Ninth Circuit court of appeals ruling that said the act violated the First Amendment. For the first time, the highest court in the country will give games the same legal protection that books, plays, and movies enjoy, because games “communicate ideas through familiar literary devices and features distinctive to the medium.” The court cited a previous case that held, “the basic principles of freedom of speech do not vary with a new and different communication medium.” With that, a long chapter of legal warfare will end and the video game industry can enjoy its own measure of creative freedom.

The decision lifts a cloud that has for years hung over the video game industry, which is becoming one of the biggest forms of entertainment. Faced with regulatory restrictions in the 1980s, the game industry introduced a voluntary ratings system for games to help parents shelter their children. But opponents ratcheted up their efforts to ban violent games state by state, and the industry responded with its own legal efforts that have now succeeded. Game designers can now create games without worry that they will fail to get mainstream distribution based on the content in the games.

One of the big problems with the law was its attempt to define what kinds of violence were considered inappropriate for children. Not only is it hard to create such definitions, it’s also hard to justify them with scientific research.

Scalia noted that Dante’s Inferno and the Grimm’s Fairy Tales depict violent scenes but have never been restricted. “Reading Dante is unquestionably more cultured and intellectually edifying than playing Mortal Kombat. But these cultural and intellectual differences are not constitutional ones. Crudely violent video games, tawdry TV shows, and cheap novels and magazines are no less forms of speech than The Divine Comedy.”

“California’s act does not adjust the boundaries of an existing category of unprotected speech to ensure that a definition designed for adults is not uncritically applied to children,” Scalia wrote. “The state wishes to create a wholly new category of content-based regulation that is permissible only for speech directed at children. That is unprecedented and mistaken.”

He went on to say that the court found unpersuasive the state’s claim that video games are special because players participate in the interactive act of violence. The state failed to justify singling out video games in arguing for a “compelling government interest” in the restrictions. Scalia said that psychological studies purporting to show a connection between “exposure to violent video games and harmful effects on children do not prove that such exposure causes minors to act aggressively,” as the effects are small and indistinguishable from the effects produced by other media.

Scalia said the game industry’s existing voluntary rating system accomplishes the goal of giving parents a choice about whether to restrict their children’s access to violent games.

“We have long recognized that it is difficult to distinguish politics from entertainment, and dangerous to try,” Scalia said.

In the concurring opinion, Justice Alito argued that it was important that the state only restricted the sale or rental of games, rather than the “creation or possession” of violent games. But Scalia and others in the majority opinion found that to make no difference.

Justice Alito’s opinion opened with a comment on how the effects of new technology are unpredictable. He noted that spending hours controlling the actions of a character who guns down innocent victims might actually be different in kind from reading a description of violence in a work of literature. He found the increasing realism of violent games to be disturbing. Motion-sensing systems (such as Microsoft’s Kinect) can now enable players to mimic violent actions to produce a violent effect on the screen, like swinging a baseball bat to “smash a skull.”

Those in favor of the law curbing the sale of violent video games argued that the case was similar to obscenity laws, but Alito and Scalia pointed out that there is a long history of agreement about what constitutes obscenity in the country, while there isn’t a similar tradition about violence.

Justice Breyer, in his dissenting opinion, said parents are simply unable to keep track of all of the content their children consume. He noted that 5.3 million grade-school age children are routinely home alone. He also noted that Federal Trade Commission tests show that kids are able to buy mature-rated video games in stores without parental approval as many as 50 percent of the times they try. Applying a “modest” restriction on speech to help parents in the compelling need to protect children is a small price, Breyer said.

He said that it is possible to define violent games that are the most realistic and potentially damaging. He found California’s description of violence with words such as “kill,” “maim” or “dismemeber” to be precise enough to be enforced, much like the term “nudity” in anti-obscenity laws. Breyer said that evidence submitted by California about the effects of violent video games on children was more extensive than that submitted for obscenity laws.

Justice Thomas, in his dissenting opinion, argued that parents have authority over children and can thus control what speech their children hear or see. He says there is a long tradition behind that belief and that video game publishers do not have the unfettered right to speak to children without restraints. He noted that the law does not ban the sale of violent games to minors; rather, the law allows parents to buy violent games for minors if they so choose.

The high court’s members had signaled that they didn’t favor restrictions on video game sales back in November, during oral arguments.

The case is the culmination of a six-year legal battle in California. The state’s Attorney General Zackery Morazzimi, on behalf of new Gov. Jerry Brown, argued that the “deviant level of violence that is presented in a certain category of video games” requires legal restrictions to protect children.

But during the oral hearings, Justice Scalia almost immediately interrupted, pointing to Grimm’s fairy tales and saying, “So are you going to ban them too?”

Back in 2005, then-Gov. Arnold Schwarzenegger signed a law authored by state senator Leland Yee of San Francisco that made it a crime to sell games to kids under 18 where the game depicts acts such as “the needless mutilation of the victim’s body.” U.S. District Court judge Ronald Whyte blocked it on First Amendment grounds, as had other courts around the country with similar laws.