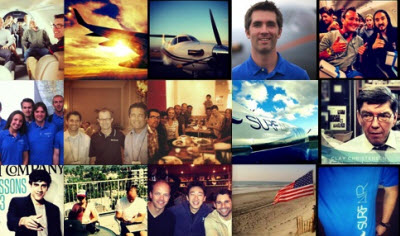 Above: Surf Air is a membership airline that aims for high satisfaction.

But Wade Eyerly and his brother David started a new airline, called Surf Air, and they think they can offer a better airline because of their innovations in the business model, Internet reservations, and service. I took a flight on the all-you-can-fly private membership airline from the Bay Area to Los Angeles, and I think they’ve got something pretty special.

I showed up 15 minutes before my flight at the San Carlos, Calif., airport. I was greeted by name and checked in on an iPad. The attendant offered me juice and talked for a while. I boarded the Pilatus PC-12 executive aircraft, which has a single turboprop engine and seats six people. It was spacious and quiet on take-off. We landed at the Burbank, Calif., airport, and the pilot himself brought the luggage out within a couple of minutes.

I didn’t have to show up two hours early so I could get through an unpredictable security line. Nor did I have to wait for my luggage or get transportation out of a congested airport. On the way back, the landing was a little thrilling, since the wind blew the plane around. But it was a perfect landing. 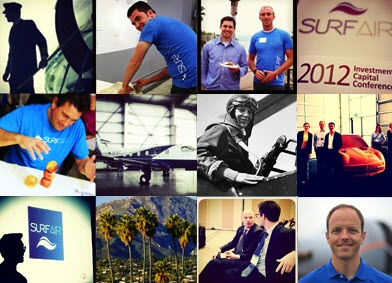 Above: The faces of Surf Air

Santa Monica, Calif.-based Surf Air operates on a subscription model. For $1,650 a month, you can fly all you want on the airline’s handful of routes. Across the month, roughly four out of 10 seats are empty. That means that members can essentially book whenever they want.

But there are some limits that keep the members from being giant pigs at the all-you-can-eat buffet. The company has just a few aircraft now. You can have four reservations at any one time, sort of like how Netflix used to limit you to four DVDs out at a time. It takes about 30 seconds to make a reservation for members.

“Our aim is to have satisfied customers,” said Eyerly, in and interview with VentureBeat. “If you don’t like our service, you will cancel. We are on the plus side of a disruptive change. This is either going to be a home run or a strike out.”

“There are 27 airports in the nation that are completely overcrowded,” he said. “But the U.S. has an embarrassment of airports. We are orders of magnitude overbuilt. There are 19,000 places where you can land an aircraft. Half of them operate at 10 percent capacity. They are like giant freeways with no cars on them at all.”

The focus of Surf Air is safety, simplicity, community, and being “first class,” Eyerly said. The company has a Big Data approach as well, blending some art and science. It uses advanced mathematics to calculate how many flights it can operate profitably based on its subscription model. Once the company operates for a longer time on more routes, it can refine its mathematical model to optimize both profits and customer satisfaction.

“We can experiment with different routes, and each one teaches us something different,” Eyerly said. 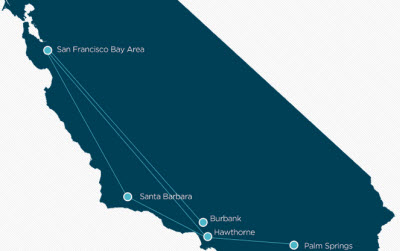 Eyerly and his brother Dave are tech industry and airline veterans. They puzzled through the idea for about five years, examining different models for starting an airline. In July 2011, they set up a web site saying they wanted to set up an all-you-can-eat membership airline with executive aircraft. They shared the link. Within six weeks, they had more than 12,000 sign-ups. That turned the hobby idea into a real opportunity. They moved from the Washington, D.C., area to go through a startup accelerator program at Mucker Lab in Santa Monica.

“Everyone there had a common cause and was heads-down focused,” Eyerly said.

They started flying in June on the route between Los Angeles and San Francisco, one of the most heavily trafficked in the world, with 9,500 daily passengers and a lot of competition. That competition has created congestion at the major airports, so there are plenty of people who want an easier experience, as the flight time is often less than the time spent waiting in lines getting to and from the airports.

The result has been a big success. The service works for people like venture capitalists who are visiting their portfolio companies, or executives who have a loved one in another city.

Meanwhile, everybody hates airlines, with service polls showing that they rate worse than cable TV companies in customer feedback. Airline industry net promoter score is 17. The highest-rated airline, Jet Blue, has a rating of 60. Surf Air’s early membership feedback shows its customers are incredibly satisfied with the service, with a net promoter score of 91. That means almost every customer will recommend Surf Air to a friend.

“People love what we do,” Eyerly said. 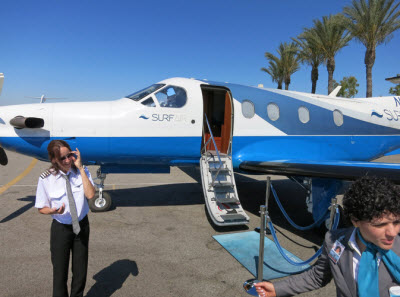 Investors like the pitch so far. The company raised $9 million in two rounds in 2012, and it anticipates raising another round soon. Investors include Zappos founder Tony Hsieh’s VegasTechFund, Velos Partners, and Base Ventures.

“The current airline industry is flawed and bogged down by bureaucracy and red tape – it’s begging for disruption and innovation, especially when it comes to business or commuter-style air travel,” said Jared Reitzin, CEO of MobileStorm. “Surf Air is the first emerging company I’ve seen that truly gets and marries simplified travel and an enhanced customer-centric experience.”

The model is similar to the way Southwest Airlines got started, using under-served airports near big cities and providing the best service on its routes. Surf Air is operating on a smaller scale.

At some point, Surf Air plans to add what could be a very lucrative route: Los Angeles to Las Vegas. Does that mean it would be a party flight?

The company went from 23 employees to 81 in a few months. It was recently flying 16 flights a day. It isn’t planning on taking on the big airlines with San Francisco to New York flights, where they airlines make a lot of their money. It will focus where the big airlines lose money, on shorter routes.

The Pilatus PC-12 planes are relatively low-cost to operate, and they’re quiet enough that you can sleep, work, or talk on board. The company buys the same models so that it can lower its maintenance costs and have plenty of spare parts when necessary. The turboprop engine is very efficient and lets you take off and land on very short runways. So far, the company is staying away from stormy markets, where the small planes get tossed about too much. The type of aircraft helps the company break even on every route that it operates.

There isn’t a ton of competition, aside from charter airline companies like XO Jet.

“As investors we try to back smart founders pursuing bold ideas,” said Erik Moore, early investor in Zappos and founder and managing director of Base Ventures. “It’s clear that people are craving a service like Surf Air based on the number of people who have signed up for membership at the concept stage and well before the service was available.”