The global economy may be in the dumps, but entrepreneurs in emerging markets like Mexico, Brazil, and South Africa aren’t as worried as you might expect.

That’s according to a new survey from Endeavor, a New York nonprofit group that supports entrepreneurs in emerging economies. Last month, the group asked 89 of their companies in eight countries how they’ve been affected by the financial crisis, and some of the answers took a predictably negative tone. For example, 85 percent of them said they had been affected by the global crisis, 51 percent said they were seeing reduced sales, and 48 percent said it was harder to get financing. The responses were slightly bleaker when predicting results for 2009, with 55 percent expecting lower sales. 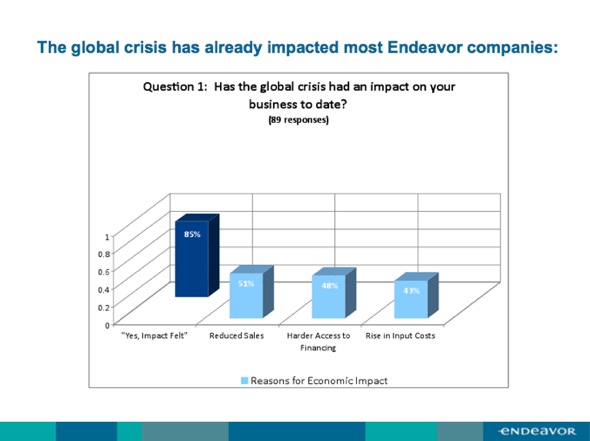 Those problems, in turn, mean the startups need to take a close look at their costs and revenues. More than half the respondents said they plan to change their business models, and about one-third predicted layoffs.

Still, those entrepreneurs don’t plan to spend 2009 hiding out in a bomb shelter. After all, downturns provide opportunities, especially hiring better talent at a more affordable price. On average, the companies still expect to grow about 31 percent next year and to increase their workforces by 12 percent.

Given the circumstances, that’s darn good news, and it reflects some of the advice we’ve heard in Silicon Valley: Companies need to take a close look at their business model, but the best startups will survive. I wondered whether the survey respondents were just putting on a brave face, but Endeavor’s Elmira Baysrali, says they’re not. After all, in many cases, these entrepreneurs aren’t just tossing off idle speculation, but drawing on past experience with their countries’ economies. In fact, Baysrali said that during a recent tour of Silicon Valley, many Endeavor entrepreneurs wanted to share their wisdom. “You guys should come to us for the advice, because we’ve been there. We’re living proof that the world doesn’t collapse when there’s a credit crunch.” 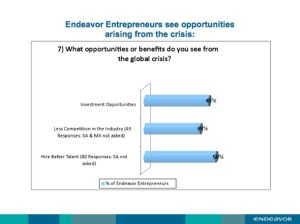