My colleagues and I at Juniper Research recently completed a survey of nearly 400 company founders, executives, managers and IT specialists. Our aim was to provide a greater understanding of current and planned enterprise deployment of blockchain solutions, including an assessment of the perceived key benefits and challenges arising from blockchain implementation. The survey also sought to gauge the level of enterprise investment in blockchain technology and discover which companies were regarded as having the strongest leadership credentials in the space.

Awareness of blockchain has increased dramatically

To begin with, we found that 39 percent of all companies, including 56 percent of companies with more than 20,000 employees, were either considering deploying, or were in the process of deploying, blockchain solutions.

The dramatic increase in awareness, with more than 4 out of 5 of those surveyed having “a little” or “a good” understanding of blockchain significantly reduces the scale of the initial challenge facing platform and technology providers. Indeed, several blockchain technology companies told us they have witnessed a sea change in enterprise education; the level of initial discussions has shifted from “What is blockchain?” to “Which blockchain protocol?” 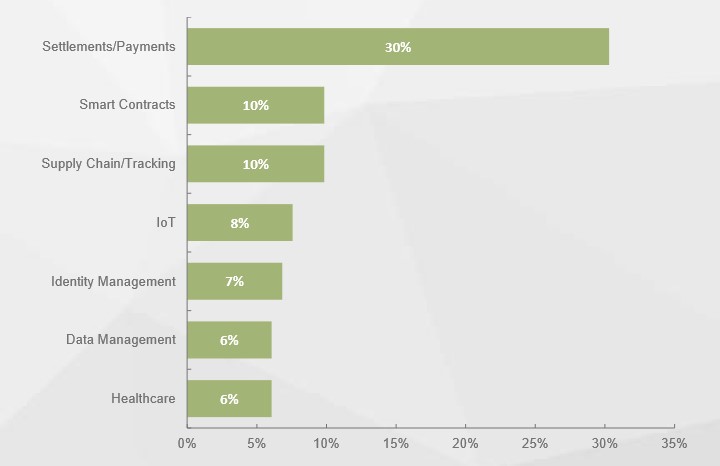 Above: Among companies deploying or considering deploying blockchain, here’s the breakdown of what they plan to use it for. Settlements/payments clearly dominate early deployments. Source: Juniper Research

Not only are many companies now actively considering blockchain deployments, a significant proportion are anticipating integration of blockchain into their systems within the next 18 months.

Our survey found that: 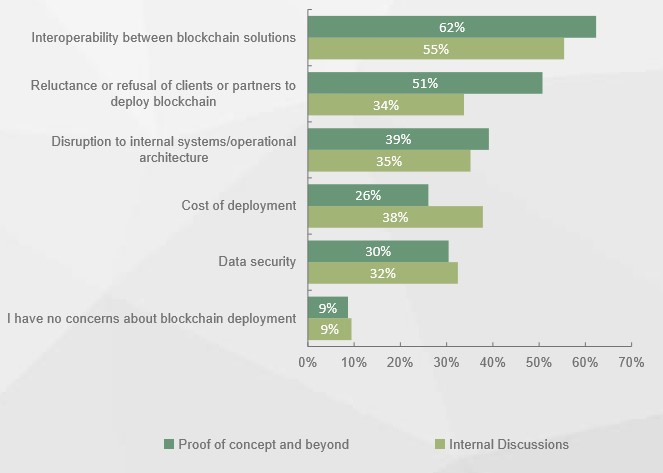 Above: A look at the concerns companies have with blockchain — with the highest volume coming from those committing to blockchain. Source: Juniper Research

A pressing concern for many companies is the extent to which the implementation of blockchain technologies might disrupt both internal systems and, potentially, relationships with customers.

In part, this is due to fears around interoperability; that customer systems may no longer integrate with/be compatible with their upgraded systems and that they will lose business as a result. Nearly half (45 percent) of the largest companies (20,000+ employees) surveyed claimed this would be a challenge, while this figure rises to 59 percent amongst all companies that are either considering or actually deploying blockchain.

The survey also found that 42 percent of companies deploying, or considering deploying, blockchain were concerned that the reluctance or refusal of their clients or partners to deploy blockchain technologies might cause them difficulties, compared with 25 percent of all companies surveyed. This suggests that increased awareness of blockchain’s capabilities, garnered through internal meetings and PoC, in turn leads to a greater understanding of the scale of potential hurdles.

We were also keen to gauge which technology providers were perceived as having the strongest leadership credentials in the blockchain space. With this in mind, we invited respondents who were either deploying, or considering deploying, blockchain to rank selected providers. Here, there was a clear winner. Nearly 43 percent of respondents ranked IBM first, well ahead of second-placed Microsoft (20 percent). Furthermore, IBM was ranked first both by every industry vertical and by every size of enterprise, confirming its position as the leading provider of blockchain technology in the world.

IBM has certainly been highly proactive in the blockchain arena; between January 2016 and June 2017, it announced more than 30 clients for blockchain solutions, ranging across use cases from settlement to asset tracking, from music copyright to loyalty programs.

Furthermore, the IBM Blockchain was the first commercial deployment of Hyperledger Fabric v1.0, a foundation for developing solutions with a modular architecture, which allows clients to create a skeleton application User Interface to expedite app development.

Working with an array of third parties to increase expertise and awareness across the ecosystem, ranging from Hyperledger to its own Accelerator program, IBM has arguably done more than any other company to stimulate involvement in the technology.

Dr. Windsor Holden is Head of Forecasting & Consultancy at Juniper Research. He has written a number of studies for Juniper focusing on blockchain and cryptocurrency, including the Blockchain Enterprise Survey: Deployments, Benefits & Attitudes and The Future of Blockchain: Key Vertical Opportunities & Deployment Strategies.