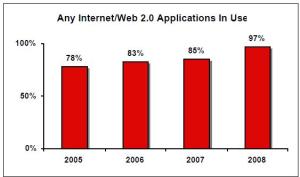 Internet applications have almost entirely penetrated the work place, with 97 percent of respondents to a new survey being released today saying they use at least one Internet application. That’s up from 85 percent a year ago, according to FaceTime, which makes work place monitoring and Internet security software.

That raises a tough question for employers. If I’m using Facebook during the day, am I goofing off or extending my professional network in a way that will ultimately benefit the company?

About 79 percent of workers use Facebook, LinkedIn or YouTube at work for business reasons. But 82 percent say they use these sites and other social networks and social media sites for personal reasons. About 51 percent of workers use social networks at least once a day. And 26 percent access the sites several times a day. The most common work-related reasons: professional networking (54 percent), research (52 percent), and learning about colleagues (52 percent). LinkedIn is the most commonly used site for professional purposes (62 percent) while 55 percent use YouTube for personal reasons. 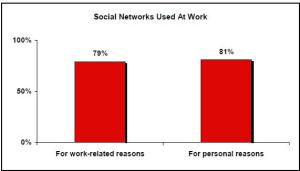 The top web applications used at work include web conferencing, streaming audio and web-based email. About 82 percent of employees now use web conferencing, up from 72 percent last year. In two thirds of the companies polled, there are eight or more web applications in use, up three-fold from 2005, the first year when FaceTime started doing the study. About 54 percent of those polled use file sharing software.

Some of this spells trouble. About 73 of IT managers report at least one Internet-related attack at their organization at some time in the past. Viruses, Trojan horses and worms (59 percent) are most common, followed by spyware (57 percent) for a close second. About 37 percent of IT managers say they found employees who used non-compliant applications with respect to protecting company intellectual property. About 27 percent say their employees have unintentionally released secret company information. A typical incident requires 22 hours of employee time to deal with the information leaks, with costs running more than $50,000 in a month. (Now, when you’re reading this, keep in mind that FaceTime makes money by selling Internet security products, and so this part of the study is clearly self-interested. FaceTime commissioned NewDiligence, a market research firm, to conduct the survey in September.)

Another interesting tidbit: If corporate attorneys asked IT managers to reproduce the logs of an employee’s instant messages, 51 percent would not be able to do it.

FaceTime surveyed more than 500 IT managers and employees to determine the impact of social networks and web sites on employee behavior.