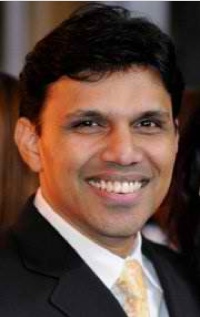 Chuck Ganapathi, the man who created Salesforce.com‘s Chatter, the company’s largest product development effort ever, has left to join Accel Partners as Entrepreneur in Residence.

Ganapathi said in an interview with VentureBeat Monday evening that he’ll seek to build a company that is both “mobile” and “social” at its core, adding that the collision between those two is the most exciting trend happening for enterprise companies right now. We’re in the midst of one of the most exciting times of technology transformation, he said.

While the last decade saw a fundamental shift in cloud computing, with Salesforce.com very much a trendsetter in delivering its service over the Web, innovation in the sector has been more modest recently, Ganapathi explained. He said he foresees another fundamental shift now happening in enterprise: “We’re seeing a step function now in social and mobile…we’re going to see the next Salesforce.com.”

And Ganapathi said he’s on the prowl to build that next company.

He doesn’t have any specifics about his plans for the company yet, he said, noting only that he’s happy to be starting with a clean sheet of paper after spending six years at Siebel followed by five years at Salesforce. After brainstorming his idea, he’ll be running it by friends, partners, and potential customers to get feedback, he said.

As an Entrepreneur in Residence (EIR), he is tasked to think up a promising business idea, with the expectation that Accel Partners will then fund the idea to allow him to build it into a company. At Salesforce, he was senior vice president of products for Chatter and Mobile.

He said there’s still a lot more disruption to come for the enterprise.

Facebook and other social networking technologies let people connect in their personal lives, but it’s “still early days” when it comes to connecting and sharing with people in their work lives, he said. True, Chatter, the social collaboration tool within Salesforce.com that Ganapathi built, became one of the company’s most successful product launches. He took it from a team of three people to about 200 people. And it’s an early example of helping people collaborate in the workplace. Companies like Yammer and Jive are competitors. But it still feels like the very beginning, Ganapathi said.

Ganapathi mentioned both Dropbox and Evernote as inspirations. These are products that are highly viral, because employees are demanding to use them, and then pushing them into the enterprise.

He said the current era — with all the opportunity it affords — reminds him of the heyday of the Internet 1.0, circa 1997, when he was back in business school. Indeed, there, at Stanford’s Graduate School of Business, is where he met Kevin Efrusy, who is now a prominent partner at Accel. That’s where he also met Ping Li, another Accel partner active in cloud investing. So once Chatter had been successfully launched, and Ganapathi began to look for his next move, his “first call was to to Kevin,” he said.

Accel was the firm that backed Facebook, and is generally considered to be one of the handful of top-tier venture firms. Efrusy is widely credited for having sourced the Facebook deal for the firm.

During his stint at Salesforce.com, Ganapathi championed and led the acquisition of two start-ups: Dimdim, a real-time collaboration platform, and GroupSwim, a community platform with semantic filtering technology. He also integrated the acquired technology and teams from two file sharing and collaboration start-ups, Koral and SlideAware.