Redemption Games is launching Sweet Escapes, the first mobile game from the new studio that a cadre of Cookie Jam veterans founded.

The free-to-play iOS and Android game has cute characters and a candy theme, riffing off the sweetness of Cookie Jam and Candy Crush Saga. But Sweet Escapes has different gameplay that’s been baking over the past two years. It’s available today.

The game comes from a Carlsbad, California-based team led by Michael Witz and Dan Lin, who worked on Cookie Jam (which debuted in 2013).

Jam City acquired their studio, Mob Science, years ago. Jam City had them work on their first game, Cookie Jam, which generated more than $650 million and continues to operate today as a popular cookie puzzle game. Their pedigree enabled Redemption Games to get a $5 million investment from Supercell, the Finnish maker of the wildly popular Clash Royale and Clash of Clans games.

“It has been quite the journey,” said Witz in an interview with GamesBeat. “It’s a matching game with collapse mechanics and building aspects similar to Gardenscapes. We’ve also created our own original story, in a magical land with little hamster-morphic characters.” 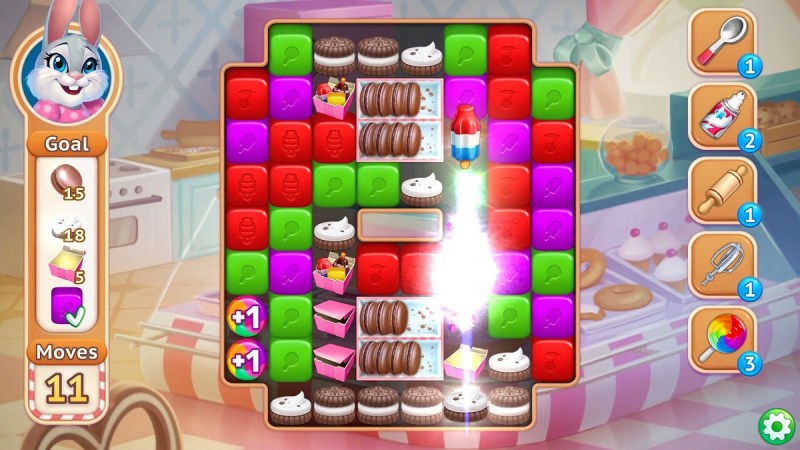 Above: Sweet Escapes is the latest casual puzzle game.

With Sweet Escapes, Redemption Games has crafted a matching puzzle game with unique and themed challenges, original story and characters, and accessible gameplay for everyone.

The lead character, Joy, is a magical bunny who used to work as a youngster in a bakery in a little village called Sweet Escapes. Unfortunately, after the great Sugar Crash, all the stores had to shut down.

As the player, you have become the new owner, and you get to design and rebuild these delicious stores and bring to life a thriving new town. Along the way, you have to open up an ice cream parlor, a chocolate store, and a coffee house. You also get to befriend a zany and cute cast of characters, such as Scoops, a silly Penguin that seems to always get into mischief. The goal is to create a thriving village of sweet shops. 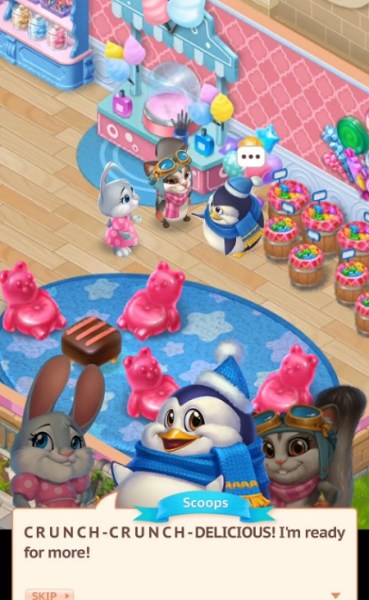 Above: Sweet Escapes has zany characters.

“I suppose it sort of fits into Candy Crush Saga-kind of sphere,” Witz said. “We don’t have a map. Rather, you unlock different zones. You earn stars in the puzzles and then you spend your rewards on the stores.”

While it might seem designed to target women and girls, Witz said that a lot of men, like him, play these games as well.

The original Cookie Jam launched with fewer than 100 levels. But Sweet Escapes is launching with 500 levels, over 25,000 lines of story, gigabytes of art and animation — both 3Dand 2D — and multiple live events that will keep things fresh.

The team will also crank out new content and events to give Sweet Escapes a longer life.

Witz said the table stakes now include making a great game, art, theme, technology, analytics, live operations, and a user-acquisition strategy that can coordinate all those together to bring in profitable cohorts of users at scale.

5518 Art Studios contributed art to the project, and James Zhang at Concept Art House and Ophir Lupu and Blake Rochind served as advisers at UTA. Redemption has 23 employees in Carlsbad, not including contractors.

As for Supercell, Witz said, “They’ve been a big inspiration for us. We are trying to operate as a studio based on how Supercell operates. It’s a very flat structure.”