The San Francisco-based startup provides two products, or “receivers” — the Piksi Multi and Duro. Both have access to several frequency bands. “This gives an autonomous system much greater accuracy and reliability,” wrote Swift cofounder and CEO Timothy Harris, in an email to VentureBeat. 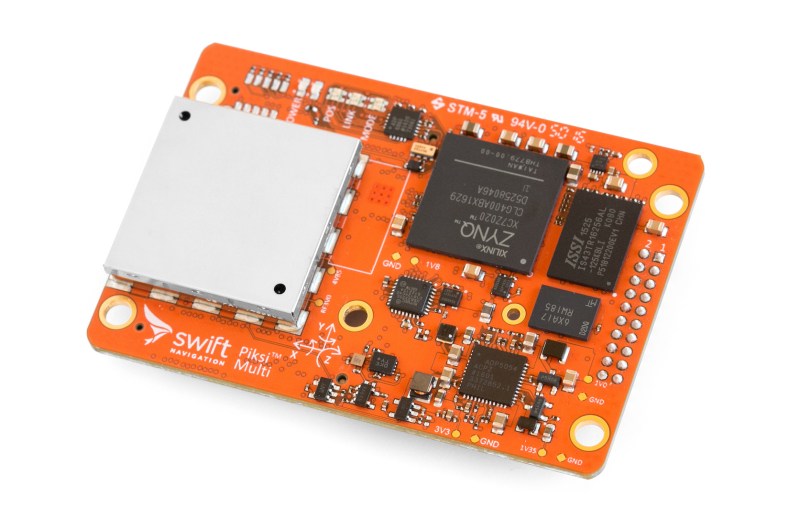 Above: The Piksi Multi receiver

The Duro is built for rougher outdoor environments. It can be submerged in a meter of water and withstand very high and low temperatures, vibration, dust, moisture, and other elements common to long-term outdoor deployments, according to Harris. The product does not need to be embedded inside an autonomous vehicle, but may be simply mounted on top of it.

Rather than manufacture its own custom chip, Swift utilizes widely available cell phone components. “This allows us to offer pricing at ten times less than competitors,” said Harris. The chief executive claims that most high-accuracy GNSS receivers are priced between $7,000 to $10,000 a unit, whereas Swift sells its Piksi at $595 a unit — and even cheaper in bulk orders.

“For autonomous vehicles to become mainstream, the cost cannot be in the $10,000 range, but needs to be at a price point that can be built into a fleet of self-driving cars,” said Harris.

Swift claims to have more than 2,000 customers in sectors that include self-driving cars, precision agriculture, unmanned aerial vehicles (UAVs), robotics, space, and maritime. Harris views legacy companies such as Trimble, Novatel, and TopCon as competitors. Quanergy is also competing in this sector with its LiDAR sensors.

Founded in 2012, Swift has raised a total of $47.6 million to date. The fresh injection of capital will be used to increase sales, focus on research and development (R&D), and grow the team of 50.