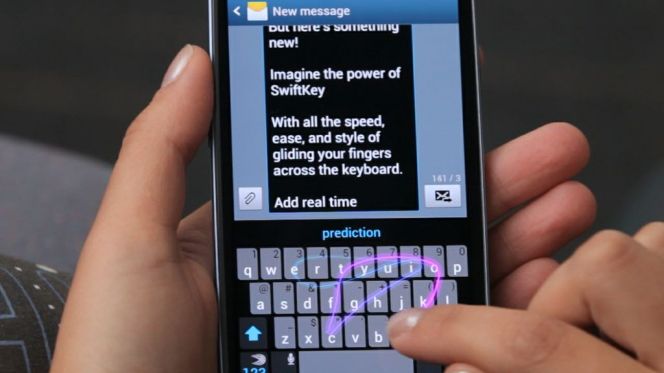 If Android users want to make their iPhone-toting friends jealous, they need only point to SwiftKey, an alternative keyboard that uses semantic analysis and text prediction.

With today’s introduction of SwiftKey 4 ($1.99 on Google Play for Android phones and tablets), the keyboard now also sports gesture-based text input, swiping a bit of its competitor Swype’s glory in the process. SwiftKey is the sort of success story that can only be found on Android, since no other smartphone platform lets you choose an alternative keyboard.

Think of SwiftKey like autocorrect on semantic steroids. The keyboard taps into your Gmail, blog, and Twitter account to get a sense of your writing style, and then uses that data to better predict what you’re typing. It’s a good fix for common typos, but it’s also an ideal solution for typing out messages with fewer taps. SwiftKey relies on a bar right above the keyboard that shows words you’re potentially going to type.

“We realized if you could create a really simple bar, with a single focus in the middle, that would be the best approach … to create the simplest user interface that people could benefit from,” said SwiftKey chief marketing officer Joe Braidwood in an interview with VentureBeat. The company previously tried to rework the standard QWERTY keyboard, but that didn’t work out so well.

The new gesture input feature is called SwiftKey Flow, and it functions much like Swype. You simply need to slide your finger across the letters you intend to type and SwiftKey intelligently figures out the intended word. SwiftKey Flow even lets you swipe across letters for entire sentences, without the need to lift your finger between words.

In my brief testing, I found Swiftkey’s gesture keyboard to be just as accurate as Swype’s. The added semantical smarts from Swiftkey sometimes led to more accurate swiping as well. After using Swiftkey Flow for over a week, I found it hard to jump back to normal touchscreen typing on the iPhone. Beyond the gesture support, I’ve grown fond of the shape of SwiftKey’s software keyboard, as well as its ability to predict entire words correctly after tapping in just a few letters.

London-based Swiftkey was founded in 2008 and has raised over $4 million in funding so far from Octopus Ventures, Cambridge Capital Group, and others.