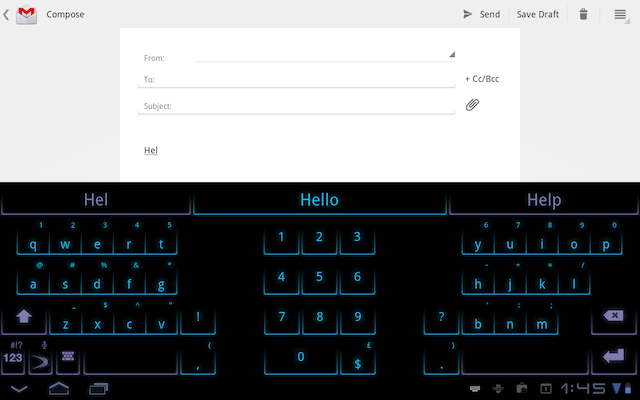 To upgrade its Android keyboard, TouchType Ltd. drew on the combined linguistic intelligence of the entire online universe.

“We made a copy of the internet,” chief marketing officer Joe Braidwood told VentureBeat.

SwiftKey X, the latest version of the company’s keyboard for Android handsets and tablets, is just an app. It replaces the onscreen keyboard with one that has greater predictive intelligence about what you’re going to type next, helping compensate for your sloppy typing and saving you time by letting you type just a few letters of each word.

To get that intelligence, SwiftKey starts with a set of rules that indicate how likely one letter is to follow another. For example, if you type Q, a U is very likely the next letter. But it goes beyond most predictive typing apps by anticipating the words that are likely to come after any given word, too. For example, if you type “Hello,” there’s a good chance the next work will be “there.” To get the initial set of statistical rules, TouchType needed to analyze a vast quantity of linguistic data.

The company rented the European DataGrid, a vast network of computers usually used to analyze particle physics research for CERN, to crawl the internet and download all the text it could. The company then analyzed the data to group it into different languages, then crunched each language set separately, ultimately distilling everything into compact files of about 3MB for each language. TouchType currently offers 22 different language modules, each of which is a separate download after you’ve installed the main app.

In addition, SwiftKey uses machine learning techniques to adapt itself to your own peculiar linguistic quirks. For instance, if you habitually use the word “quirk,” it might start becoming one of the automatic suggestions whenever you enter the letter Q.

Apart from its artificial intelligence techniques, SwiftKey X also offers some interface improvements, such as the option of choosing between a “sloppy” mode and a “precise” mode, depending on what kind of typist you are.

In its tablet version, SwiftKey also offers a split-screen mode that looks more convenient for thumb-typing on a large screen.

I’ve been using the first version of SwiftKey on my Android phone for several months and it’s a marked improvement over the stock Android keyboard. I’ve seen a quick demo of SwiftKey X, and it looks like a promising enhancement, especially for my impatiently sloppy typing technique.

The London-based company has about 35 employees, up from 5 a year ago, when it launched the first version of SwiftKey. 20 of those are engineers, including four Cambridge Ph.Ds. The company was founded in 2008 by CEO Jon Reynolds and CTO Ben Medlock. TouchType raised about $1.7 million in seed funding from Octopus Ventures in August 2010, and is currently looking to do a $2.4 million to $3.2 million round.

The company is also pursuing deals with phone and tablet manufacturers to have SwiftKey preinstalled on their hardware.

See below for a demonstration video from TouchType.