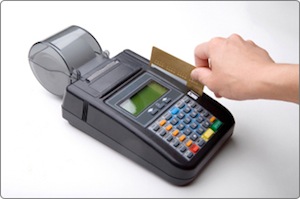 Swipely, a site where users can share their purchases, is opening to the public today after spending about three months in an invitation-only preview. And it’s introducing some new features into the mix, by awarding badges for specific kinds of shopping behavior.

When Swipely began its preview in May, founder and chief executive Angus Davis (who previously cofounded TellMe, which was acquired by Microsoft) emphasized the site’s more private approach compared to Blippy — the startups both focused on the idea of broadcasting and creating conversations around credit card purchases, but unlike Blippy, Swipely will never show the actual amount paid, only what you bought and where. (When Blippy launched, it automatically showed the purchase amount. It later added privacy controls that made it possible to hide that information.)

Davis said yesterday that it’s a mistake to look at this as a two-company race, because he’s much more interested in trying to expand the audience for this kind of social shopping experience than in trying to win a certain amount of market share from Blippy.

So is there really a mass audience for this kind of sharing? Davis acknowledged there are plenty of people who didn’t grasp the concept or were hesitant to share their information, but he said users “got it” once they actually checked out the site. With its (other) emphasis on conversation and reviews, Swipely isn’t that big a leap from the reviews on a site like Amazon or Yelp, where you’re implicitly revealing some of the things you’ve purchased or spent money on.

As for the badges, they sound similar in tone to what you’d find in location-based service Foursquare, except with titles like “Turntable”, “Bookworm”, “Movie Buff”, or “App Store-Aholic”, they’re focused on what you’re buying, not on your general activity. Davis said these badges could be used to earn rewards from retailers, and for the next four weeks Swipely is offering free prizes to badge winners. Read more competition details here.

The news also comes as Facebook is expected to announce its own Foursquare-style location features this afternoon. It’s not clear how big a role shopping will play in Facebook’s service, but it’s worth noting that Facebook will reportedly use data from Localeze to power its location directory. Swipely has also partnered with Localeze, using the technology to tag your purchases to a specific location. 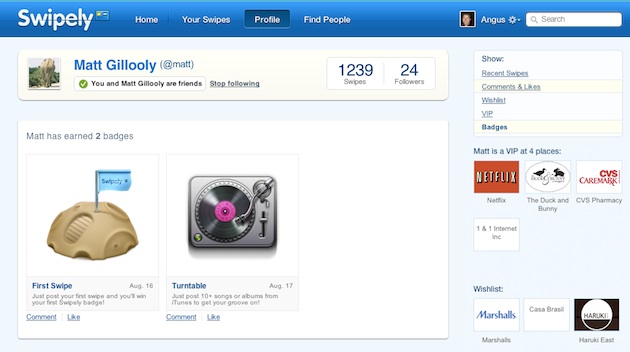