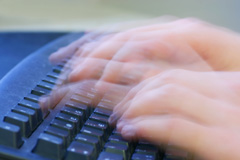 This really ought to be in the next James Bond movie. Swiss security experts showed that they can monitor keystrokes typed on wired keyboards from afar.

The researchers showed they can capture the words being typed on 11 different models of keyboards by monitoring the electromagnetic radiation emitted by those keyboards. The techniques work on PS /2, universal serial bus, and laptop keyboards. (That seems like just about everything).

The researchers at the Security and Cryptography Laboratory at Ecole Polytechnique Federale de Lausanne say they used four different means of attack from as far as 65 feet away. It reminds me of the keyboard identification techniques used to verify user identities from start-up AdmitOne. But that technique is used to protect the identity of users, while today’s hack could be used to compromise someone’s passwords. Such attacks could leave less physical evidence and involve less risk to the attacker compared to leaving a keylogger on someone’s machine to steal passwords as they are typed.