The number of players who pay for virtual goods in mobile games declined from 1.5 percent in January to 1.35 percent in July, according to a study of millions of gamers by mobile-marketing-automation firm Swrve.

In an exclusive interview with GamesBeat, Swrve chief strategy officer Hugh Reynolds and Swrve CEO Christopher Dean said they found that 62 percent of all mobile-game revenues come from 0.13 percent of all players. Those are scary and depressing numbers for developers and publishers, as they rely on virtual-goods purchases for most of their revenue in free-to-play mobile titles.

“This shows how game companies are dependent on a small group of people who are paying the bills,” Reynolds said.

This means that great care should be taken when acquiring new users, as the vast majority of them provide no revenue, Reynolds said. Companies have to try really hard to ensure that anyone acquired is likely to spend money. The data were contained in Swrve’s latest “monetization report” on mobile games. It covers information from the month of July 2014, and it comes six months after Swrve’s first monetization report.

The good news in the report is that significant growth occurred in the mid-tier of spenders — or those who spend between $10 and $20 in a month. Those payers represented 18.4 percent of unit sales and 32.3 percent of revenue, compared to just 8.2 percent and 22.4 percent, respectively, six months ago. 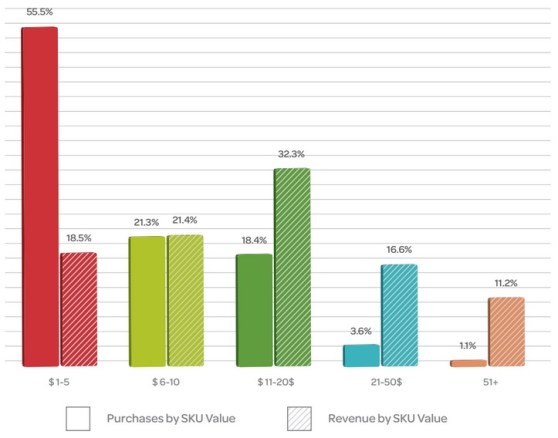 In January, the top spenders accounted for 50 percent of revenues. That means spending is more concentrated now.

The report also found that the monthly mean average spend is $24.93 (up from $22 in January). The typical paying player makes just under three purchases in a month, with the average price of each purchase being $8.34.

“These findings stress once again just how important it is to consider retention and conversion — rather than simply acquisition — when it comes to building a successful mobile business,” said Dean. “With such a significant percentage of revenues coming from a small base, it is essential to both attempt to increase that number with smart in-game campaigns but also identify your most important players and personalize their experience.”

He added, “One interesting finding was the growth in ‘mid-tier’ SKUs [stock-keeping units]. The data suggest that users are more willing than ever before to make relatively
significant one-off in-app purchases in mobile and that developers should start to consider this type of purchase as core to their business.”

In the end, Reynolds said, “You have to identify the people who generate revenues, understand those people, build a relationship with them, and give them the marketing campaigns and user experience that they expect.”