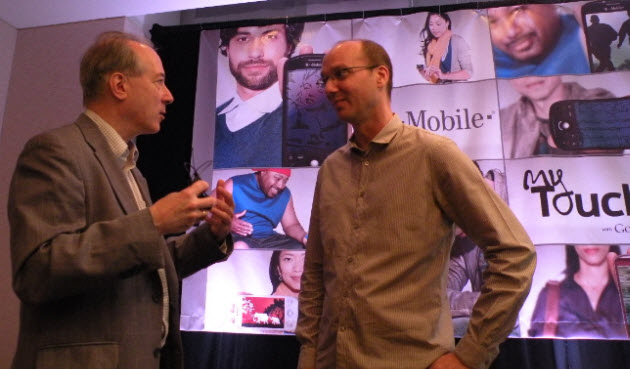 T-Mobile and Google held a joint event this morning to argue that the Android mobile operating system is gathering momentum even in the face of the iPhone’s rapid growth.

T-Mobile showed off its latest Android smartphone, the T-Mobile MyTouch 3G with Google, which is available for preorder now and goes on sale later this summer. The MyTouch is faster, thinner, has no physical keyboard, and has a brighter touchscreen than the T-Mobile G1, the first Android phone, which went on sale eight months ago. Beyond that product, there are about 18 to 20 Android phones debuting around the world later this year.

As such, Android has barely begun its assault on Apple’s iPhone fortress. Andy Rubin, the chief Android executive at Google and vice president of mobile engineering platforms (pictured above right with panel moderator Dan Gillmor), said at the event that Android’s main advantage over Apple continues to be its openness and its ability to draw a large number of hardware partners, carriers and developers into its fold.

We’ll have more conversations with T-Mobile and Google at our MobileBeat conference on Thursday.

“In the end, it’s a numbers game,” he said, in reference to competition with the iPhone. “History has shown a single product has limits on how the numbers can scale. The power of Android is there can be 1,000 different products built on Android. The magic is they are all compatible. … There could be 1,000 killer apps. The user gets to decide which ones they want to use.”

Rubin added, “I don’t feel a need to catch up. Innovation doesn’t come from just one place. Google was a company born on the Internet. It created products rapidly and iterated to get them right. The goal of Android was to bring that rapid innovation to the cell phone. The world didn’t need another platform. The world needed an open platform.”

Rubin and Cole Brodman, chief technology officer at T-Mobile USA, acknowledged that the Android growth is in its early stages. Apple has sold more than 40 million iPhone and iPod Touch units, while T-Mobile has said that it has sold more than a million G1 phones with Android software. There are 63,000 apps worldwide on the iPhone, while there are 6,300 available on the Android store. Those Android apps have appeared in the last eight months, so Google is making good progress but it has a long way to go before it catches Apple.

Rubin said the reason is that Android is open, allows for more consumer choice, and lets its users personalize it, as the MyTouch phone demonstrates: T-Mobile is going to train 7,000 sales representatives in its U.S. stores to show how the phones can be easily customized to cater to the tastes of music lovers, news junkies, sports fans or others. Flurry, an analytics firm, said that user engagement is high on Android phones now. On average, the Android G1 users are downloading more apps and using them for a longer period of time than iPhone users.

Rubin said there would likely be two updates a year to Android software, one in the summer and one in the fall, timed closely with the launch cycles of new products. He said that one of the things coming down the road is better integration of the phone with social networking functions.

Google and T-Mobile brought partners along to show they’re making gains. Alex Byrnes, an Android app developer, said that he liked developing for the Android platform because of its openness. If there’s a hole in the documentation for programming apps, he can track it down himself through various open source communications channels.

Rahul Sonnad, chief executive of Geodelic, showed off his Sherpa app, an exclusive location-based app for Android that tells you about the various stores that are near to your location. Sherpa can modify its results based on your personal tastes, and it can tap other apps such as Google Maps for various location features.

“When we look at Android, we see a lot of potential for innovation,” Sonnad said.

Although some observers worry that apps and phones may not be compatible across the whole Android space, Brodman said that apps that are loaded into the Android store have met basic compatibility tests. And while some phones will carry the Google brand name and some will not, Rubin said that is not an issue of compatibility and whether Google approves those phones or not. Rather, he said the choice of using the Google name is up to customers as to whether or not they want to get benefits of the Google name, which is associated with search.

As for the Chrome OS — the netbook operating system announced by Google this week — Rubin said that there will be some overlap in netbooks but Google is prepared to let the market and the customers sort out the definitions of where Android ends and Chrome OS begins.

“People said Android is doomed,” Rubin said. “The rumor and speculation started. At Google, we don’t let anything block us from figuring out what’s the right thing to do. Chrome has a web browser-centric view. In cell phones, there are different priorities. That doesn’t mean one wins and one doesn’t.”

He noted, for instance, that the mobile OS has to deal with hand shakes between cell sites as users move from cell to cell in a car or train. That isn’t a priority for the Chrome OS.

Rubin promised more improvements to come. He said that Google is using its own payment system for now. But as it adds more software translation layers, there will be multiple payment systems available for people who purchase various apps or digital goods. As for new device makers, Rubin said he gets surprises every day.

“One device maker came in and laid 18 devices on the table, all running Android,” he said. “I had never met him before.”