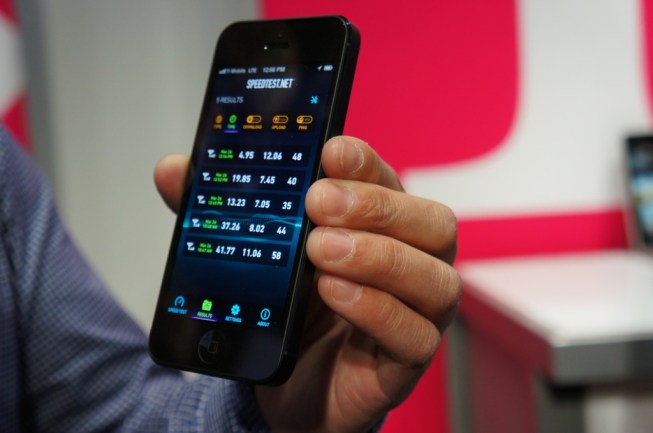 NEW YORK CITY — T-Mobile is finally getting the iPhone next month — and it looks like the beleaguered carrier’s customers can expect speeds similar to the competition.

In my brief testing of T-Mobile’s iPhone 5 at its press event today, I saw a download speed of around 16 megabits per second and an upload speed of 7.4 Mbps. That’s typical real-world speed for both AT&T and Verizon’s LTE networks in congested areas, and it’s slightly faster from what I’ve seen of T-Mobile’s HSPA+ network (its fastest network so far).

T-Mobile’s LTE network certainly has the potential to be faster, just like its competitors. Earlier benchmarks on the same iPhone 5 unit I was testing achieved download speeds of 40 Mbps and 20 Mbps and upload speeds up to 12 Mbps. It’s also tough to judge T-Mobile’s LTE network at the moment, as it only turned on LTE connectivity in New York City today. T-Mobile CEO John Legere said today that it expects to cover 100 million people with LTE by the middle of 2013 and 200 million people by the end of the year.

As a comparison, I saw a Samsung Galaxy Note II achieve download speeds of close to 60 Mbps at T-Mobile’s event today. After a certain point, though, consumers likely won’t notice the difference between two blazing fast connections.

Below, check out a demonstration of T-Mobile’s iPhone 5 by Apple senior director Stan Ng.