A new report from OpenSignal shines a light on the current state of play among mobile networks in the U.S.

This is the first time OpenSignal has produced a holistic national report on the U.S., but it had previously delved into networks in Canada, Argentina, and Brazil. It’s also worth noting here that individual user experience will vary from city to city — the OpenSignal report takes a broad view across the country, though it does provide a regional breakdown of its 4G data.

OpenSignal, for the uninitiated, has built a solid reputation for its Android and iPhone app, which passively monitors the speed, coverage, and general reliability of mobile networks simply through being installed on users’ phones. With 10 million downloads globally, the crowdsourced data it gathers offers a different view of mobile networks, letting consumers gain unbiased insights into network performance. As an aside, OpenSignal data can even help to illustrate the fragmentation of the Android ecosystem.

OpenSignal’s report reveals that the four major U.S. carriers are improving their respective services: A 4G LTE signal is now accessible 81 percent of the time, though Sprint scores the lowest with only 70 percent. Verizon leads T-Mobile by around 5 percent at almost 87 percent.

According to OpenSignal, only seven other countries have passed the 80 percent milestone. 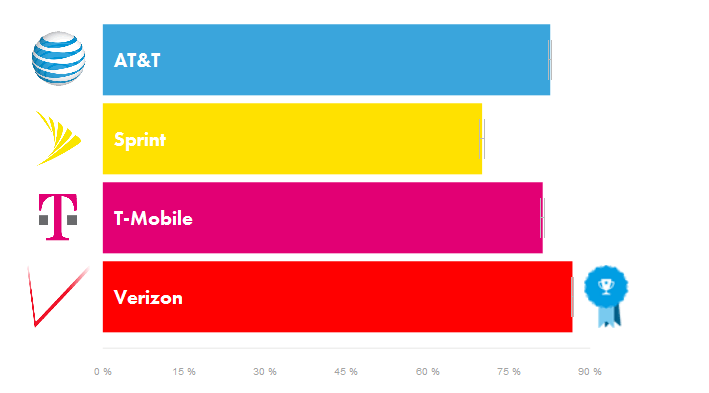 It’s worth noting here that OpenSignal’s “Coverage” metric refers not to geographical coverage, but to the proportion of time users have coverage on their phone. This is designed to account for typical use-cases in populous regions — indoors, outdoors, and when they’re moving around.

In terms of 4G speed, Verizon and T-Mobile are effectively in a two-horse race, with both offering around 12Mbps, though T-Mobile just shades it by 0.28Mbps. AT&T grabs third place with almost 8Mbps. 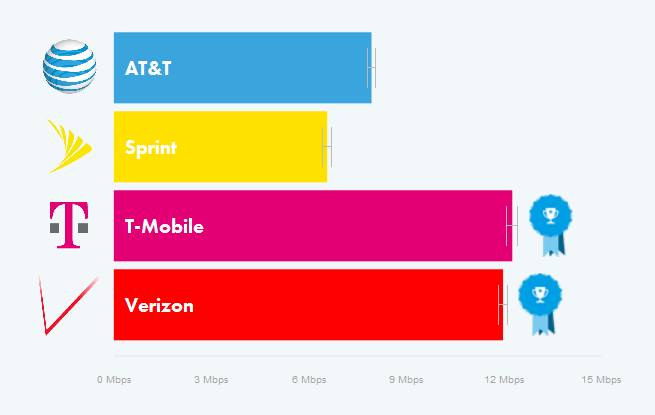 For those still not able to access 4G mobile data, T-Mobile scored pole position for 3G speeds too, with 3.48Mbps, compared to 2.22Mbps on AT&T, and less than 1Mbps on both Sprint and Verizon. 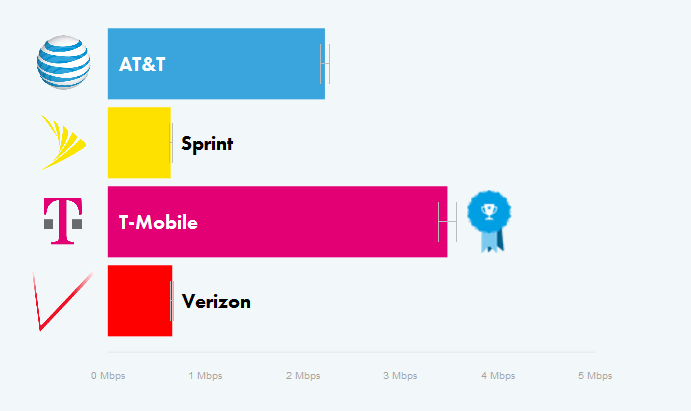 While 4G coverage is on the rise, placing the U.S. in the top 10 countries globally, the country’s speeds are lagging. Indeed, while Argentina’s 4G coverage hovers at an average of around 50 percent, its download speed is about the same as that of the U.S. This is notable, given that Argentina only launched its first 4G network a little over a year ago, whereas the U.S. has been deploying 4G networks since 2010.

Looking at OpenSignal’s last the State of LTE report, the U.S. languishes in the bottom 20 slowest average speeds for LTE, at less than 10Mbps. This compares to 36Mbps in New Zealand, 33Mbps in Singapore, and 30Mbps in Romania.

That said, the number of devices connecting to a 4G network will also affect the download speeds, so the data in the OpenSignal report may not convey the full picture. But it does give a good indication as to how U.S. networks compare to each other, and how they’re performing relative to other nations.