Sleek, fast and slim notebook computers are coming as early as this fall. But that might be the last hurrah of the laptop, as tablet computers are expected to overtake sales of notebook computers by the end of 2016. That’s the forecast for the changing computing landscape, according to Richard Shim, senior analyst for mobile devices at DisplaySearch. 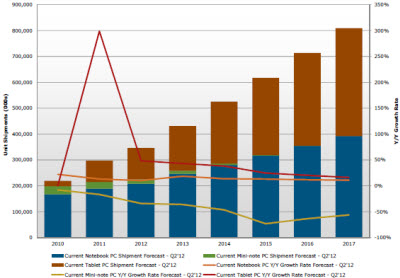 Tablets like Apple’s iPad have taken the market by storm. So far, Intel’s campaign to kickstart laptop sales with the Ultrabook label — or thin machines with high-performance and built-in security — has fallen flat in the market, Shim said. The larger market, which includes non-Intel devices and Apple’s MacBook Air, is dubbed the Ultraslim PC market. Tablets are likely cannibalizing sales of PCs at a faster and faster rate, Shim said.

A big change in the market could come with the Oct. 26 launch of Windows 8. At that time, we’ll see Windows 8 laptops, Windows 8 tablets based on Intel chips, and Windows RT tablets based on chips in the ARM ecosystem. By next year, when laptops will sport Windows 8 and Intel’s Haswell generation of power-efficient processors, thin laptops will take off in a big way, Shim said.

But that growth rate for laptops will slow as consumer tastes shift from performance to convenience. By 2016, tablet shipments are expected to overtake notebook shipments. Tablets are more responsive, are easy to carry, are more accessible, are thinner, lighter, and more intuitive to use, Shim said.

The mix of tablet sales may change. With the Jelly Bean 4.1.1 version of the Android operating system, Google finally has stable software that could jumpstart the tablet market beyond the iPad, Shim said. But the iPad is still expected to be dominant through 2017. Windows RT tablets are debuting soon. but they may come out at the high end of the market, Shim said, making their future uncertain. That’s because those Windows tablets are expected to be bundled with Microsoft Office software, which will make them more expensive.

Apple’s 9.7-inch tablets have ruled to date. But Shim expects the emergence of new screen sizes at 7 inches or so, as reflected in devices such as the Amazon Kindle, the Google Nexus 7, and the Barnes & Noble Nook. Apple is expected to debut a 7.85-inch tablet this fall.

Screen quality for tablets will get better, but it’s an open question as to whether consumers can discern the quality difference above 200 pixels per inch. Apple’s iPad is already at 264 pixels per inch. Costs will naturally fall for tablets in the future. By 2017, the largest tablet category will be $201 to $300. Right now, the largest price band in terms of unit sales is $500 to $600.