Strong tablet sales this year will help increase the shipment of devices that connect to mobile broadband — basically everything connecting to cellular networks that’s not a smartphone — by 57.8 percent, research firm IHS iSuppli reports.

Other devices in the category include mobile broadband-equipped netbooks and laptops, but it appears that tablets will continue to be the driving force. Tablet shipments are expected to hit around 59 million units this year, up 239 percent from last year’s 17.4 million figure, according to IHS.

“[Tablets are] affecting everything from supply ecosystems to chipset design, to services, applications and business models. [They] are spurring innovation not just in the wireless sector but also across multiple industries,” Francis Sideco, principal analyst for wireless research at IHS said.

Apple’s iPad is the undisputed tablet leader at the moment, but the next few years could see some Android tablets gaining a decent following of their own.

IHS notes that among the various methods to connect devices to mobile broadband networks, mobile hotspots and integrated chipsets are the fastest growing, increasing 25 to 50 percent more than other options like USB dongles. Eventually, I suspect, mobile broadband will become more of a standard feature for new computers, in particular ultraportable laptops. Google is already spearheading that idea with its Chromebooks. 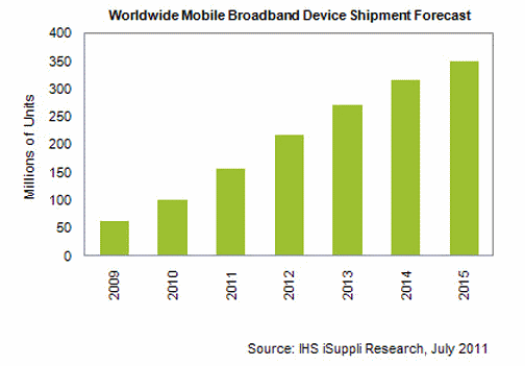