NPD’s latest report suggests that tablet shipments will grow 67 percent this year to 256.5 million and will reach a massive 579.4 million in 2017. In contrast, laptop or notebook PCs will decline 10 percent over the same period, dropping from 203.3 million to 183.3 million.

But there are two bright spots for laptops. 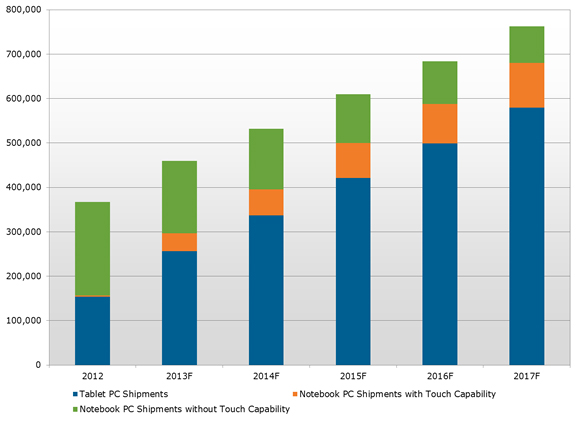 First, the portion of the notebook market that is touch-enabled will grow 48 percent in 2014, from almost nothing in 2012 to close to 100 million in 2015 and increasing each of the following two years. That’s driven by the increasing importance of touch in computing platforms of all kinds, the need for laptop manufacturers to innovate, and also by Intel’s proclamation that third-generation Ultrabooks using the chip-maker’s new Haswell processors must include touch.

And second, the premium ultra-slim laptop market — such as Ultrabooks and Apple’s MacBook Air — will account for two-thirds of touch-enabled notebooks in 2013, and 80 percent by 2017.

Missing in action, however, is Windows 8.

“Thus far, Windows 8 has had a limited impact on driving touch adoption in notebook PCs, due to a lack of applications needing touch and the high cost of touch on notebook PCs,” Shim says.

The biggest driver for touch and tablet adoption, NPD says, is white-box tablet manufacturers. Increasingly, small, regional brands are building Android-based tablets — especially in China — and distributing them in emerging markets where laptops have never really gained a foothold. These white-box brands accounted for a full third of tablet shipments in 2012, and NPD expects that percentage to remain steady over the next few years.

The key take-away for PC manufacturers?

It’s enough, perhaps, to make the big manufacturers wish for the good old days of the netbook.