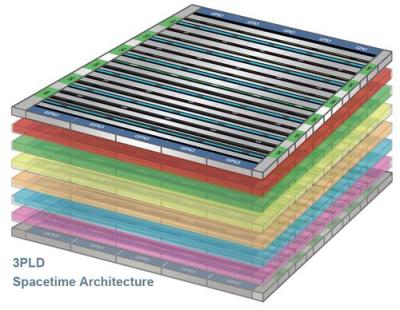 A Silicon Valley chip startup has raised more than $100 million over the past seven years, and now it’s finally talking about a new design for chips that can change their functions on the fly.

Tabula has what it calls a “groundbreaking architecture” where  its chips can dynamically reconfigure themselves. Many former rivals, such as QuickSilver Technology, tried and failed to do the same thing over the years.

But try the startups must, as there is a pot of gold for anyone who solves this problem. Programmable logic is a big part of the chip industry, with two huge rivals, Xilinx and Altera slugging it out year after year as the dominant market leaders. These chips are software-programmable, and so they are flexible. You can put them into an electronic product at the last minute before you have to ship it. But they are big and expensive because it requires a lot of redundant circuitry to make the chips so flexible.

On the other side are custom chips that are hard wired, or essentially set in stone. These chips like Sony’s Cell microprocessor are designed well ahead of time. They’re inflexible, but they’re also cheap because they need no redundancy in their designs. The design of these chips is the hard part and it takes big teams years to finish at a cost of maybe $60 million.

Dynamically reconfigurable chips could actually combine the best features of both of these categories of chips. One of the problems is that these chips are also hard to design and can be difficult for programmers to master. If the makers of dynamically reconfigurable chips succeed, they could be used in things like cell phone radios that adapt to the quality of radio signal at hand. Tabula, however, appears to be going after the high-end field programmable gate array market — the same one dominated by Xilinx and Altera. Those chips are used in a wide variety of complex electronic products. That’s why Tabula is worth watching.

The Santa Clara, Calif.-based company’s name is derived from the Latin “tabula rasa,” which means blank slate. Tabula was founded in 2003 by Steve Teig, the company’s chief technology officer. The chief executive is Dennis Segers. It has acquired more than 80 patents and has more than 100 employees, the Mercury News reported. The technology is called 3PLD, or Spacetime. It relies on extremely fast interconnection within a chip, and it achieves that interconnection by stacking circuits three dimensionally.

Tabula’s investors include New Enterprise Associates, Greylock Partners, Benchmark Capital, Crosslink Capital, DAG Ventures, Balderton Capital, Integral Capital Partners and SVB Capital. Tabula first produced samples of its chips three years ago and it now has them in the hands of customers. (It takes a long time to test a new kind of chip, and that’s why the funding amount has to be huge for this kind of startup).