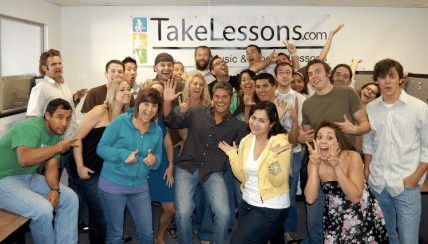 Today TakeLessons, a site that helps music students find local teachers and allows teachers to manage their business, is whistling a happy tune all the way to the bank.

The San Diego-based company just announced Crosslink Capital (the largest investor in Pandora) has given them $6 million. This is their first institutional round.

TakeLessons is the largest network for music classes in the United States. Launched in 2006 with $1.7 in  funding from angel investors and founder/ CEO Steven Cox, the company has 60 full-time employees in San Diego and 1000’s of contractors.

“You have a company in San Diego that has consumed very little capital and obtained a large foot print,” says Eric Chin, partner at Crosslink Capital. “If you had done this in the Valley you would have needed more capital.”

TakeLessons software helps recruit, vet, validate and supports teachers in 35 types of music (guitar, piano, singing, etc). Only the top 10 percent of teachers that apply to the network are accepted. The demand side lets users choose, schedule and transact with a trusted brand that didn’t exist until TakeLessons. Today the network has expanded to 2,800 U.S. cities.

The company has also partnered with Best Buy, which has expanded their presence even further. TakeLessons CEO Steven Cox spoke to VentureBeat and explained how the Best Buy connection came about.

“I was on the treadmill at 5:30am watching CNBC and a guy from Best Buy said ‘we’re moving into music. There’s demand and we are opening 100 stores that are like giant music stores,’ ” says Cox. “He also said lessons and education would be offered.”

Cox cold called that Best Buy executive immediately, but didn’t get a call back. His call wasn’t returned until after the 4th try. The two talked for a few minutes and then a week later Cox was invited to Best Buy headquarters for a meeting. Twenty-two months later, a partnership deal was signed.

“The whole premise is that Best Buy wanted to deliver services around their products,” says Cox. “They did a bunch of research on lessons but needed to build the technology. Instead, we built out a very strong network for them. They are using all of our teachers, our scheduling systems, billing, everything.”

TakeLessons was used in 26 Best Buy music stores in August 2010. By September 2011 it was in 70+ more. TakeLessons also employs 90 teachers located in the stores.

The concept for TakeLessons has roots in Cox’s musical upbringing (his parents are musicians) and his entrepreneurial instincts. The company began to materialize after two events. First, the drummer in Cox’s rock band quit so he could focus on teaching music in order to support his family. Second, Cox’s voice lesson teacher moved out of the country, without notice and without refunding his $600. That’s when he started working on TakeLessons.

“Instructors were good at teaching music but they weren’t the best at using technology to run demand and market themselves,” says Cox. “It was a free for all, fragmented industry. We went out and built a business and once we proved our model we were introduced to the right guys.”

It was one of TakeLessons original investors that introduced Cox to Crosslink.

“When we met him, it was an instantaneous connection,” says Crosslink’s Chin. “A company’s culture and ability to execute comes from the top. Steve is a natural born leader. It’s the number one thing I look for. Number two is a company going after multi billion market opportunities. TakeLessons meets both of those requirements.”

Chin recalls that when he visited TakeLessons in San Diego even the company’s janitor could recite the company’s mission. Two members of the Crosslink deal team ended up using the service. One was a concert pianist, the other a father wanting to take guitar with his son. Chin says both found what they were looking for.

“We’ve been following market places for the last decade and invested in other companies that are doing a marketplace for services,” says Chin. Those companies include sports media site Bleacher Report and virtual bookkeeping site Balance Financial.

“We are looking at a bunch of other companies in this space,” he says.

If your company is interested in joining Crosslink’s portfolio, just make sure you hit the perfect pitch. Sorry, I couldn’t resist!