As companies take more kinds of data into consideration, integration of it all becomes more complicated for admins. A startup called Tamr has built software that lets those admins automate some of the grunt work and digitally call on informed colleagues to help, too.

Also today, Tamr is announcing that it has raised more than $16 million in venture funding. That might seem like a lot for a year-old outfit, but it makes sense when you take a look at the people behind the startup: database pioneer Michael Stonebraker and serial entrepreneur Andy Palmer, who were also cofounders of data analytics company Vertica, which HP bought in 2011.

The idea derived from research the two were doing at the Massachusetts Institute of Technology, where they learned about how companies wanted to spend less time getting new kinds of data ready for analysis.

“We came to the conclusion that what was required was something that automated the integration of new sources and new attributes over time and would insulate the system from the changes in the fundamental sources so that you didn’t have to go … and re-engineer from the top down all the time all this ETL [extract, transform, and load work],” chief executive Palmer told VentureBeat.

The software he and Stonebraker developed taps the power of people alongside machine-learning algorithms to speed up workflows for companies that want to analyze data, not just rack up more and more of it. If things work out well for the startup, Tamr could become common inside the plumbing at big companies as a next-generation tool for combining data for more comprehensive analysis.

Technology companies with master-data-management software, like IBM and Talend, could represent competition, and some startups, like ClearStory Data, can perform certain aspects of what Tamr does, Palmer said. But Tamr is focusing on a single problem that could become more typical in the years to come, as big data projects become commonplace.

Tamr’s software does a few things. It maintains a list of all of a company’s data sources. When a new data source comes in, Tamr inspects it to see what it has in common with existing data sets.

But the software is only so smart; to increase the likelihood that one data set will be correctly integrated with others, Tamr recommends people within a company who know a lot about certain kinds of data. Then a person using Tamr can direct the software to send an email to every expert inside the company. Their responses can help the user weave in the data in the best possible way.

As a result of using Tamr, more matches get made automatically. And admins can spend considerably less time reviewing a new data source and comparing it with other sources to ensure everything aligns properly.

The technology could come in handy for companies that reel in more and more kinds of data all the time. And like the data transformation software from startup Trifacta, Tamr could help companies cut down on prep time and increase the amount of time spent on analytics that could lead to killer new ideas and initiatives.

The software is available as a cloud service, but most customers choose to run it in their own on-premises data centers, Palmer said.

Google Ventures and New Enterprise Associates led the funding round, which is the startup’s first one to date.

About 25 people work for Tamr now, and the startup should have at least 30 or 40 people by the end of the year, Palmer said. 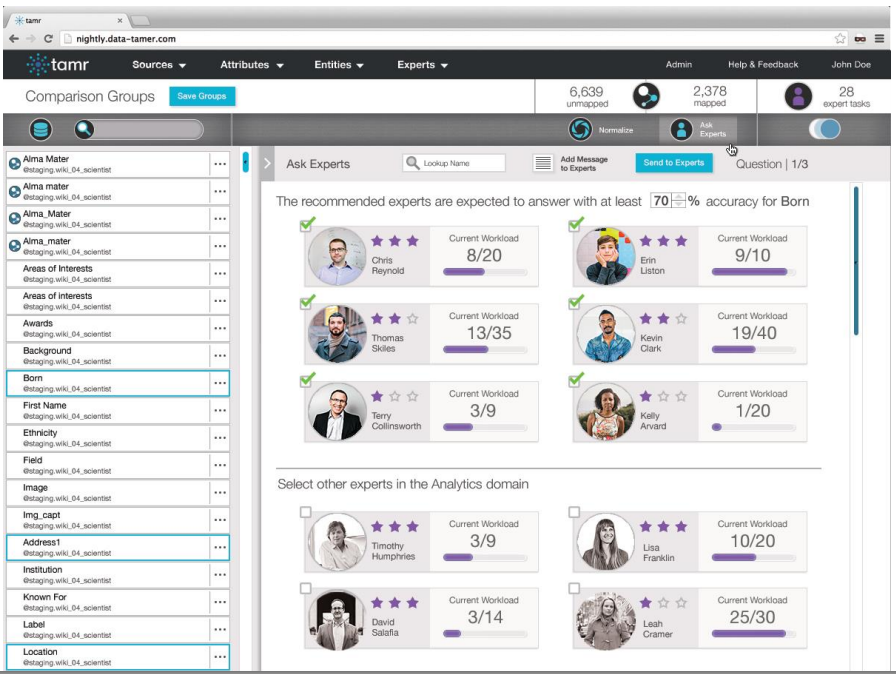 As with all our events, we cover every company that appears onstage at DataBeat without regard to sponsorship. You can view a list of all of our sponsors here.