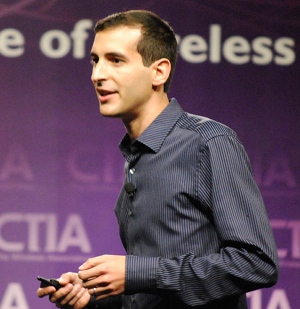 Cross-platform video calling startup Tango has seen tremendous growth since its launch in early fall of last year. One of the biggest reasons for its success, according to CTO Eric Setton, may be the company’s crazy strict 2-week development cycle for its iPhone, Android, and PC applications.

I spoke with Setton (pictured) during CTIA Enterprise 2011 in San Diego this week to talk about how quickly the service has grown and what we can expect in the future. Setton also delivered a short keynote speech on Thursday, the closing day of CTIA, as well.

Tango has grown exceptionally fast since its launch about a year ago. It now has more than 24 million users (half in the U.S.) and works on more than 450 Android and iOS devices. Setton said he was glad the company launched around the time of the iPhone 4 launch because it was about the time most major smartphones starting including a front-facing camera.

“I would not want to be a company just getting into mobile video chat now because there is so much work to be done to get all the devices to work right,” Setton said.

The quick two-week development cycles, which stay on schedule using a large countdown clock in the main office, are possible because Tango has two offices in different parts of the world. When the company’s 75 Palo Alto employees are winding down their work at headquarters, the small 10-person engineering team in Beijing, China picks up where the Palo Alto team stopped.

“We listen to what our customers want and we know how damaging it can be to have a buggy application,” Setton said. “We built the development cycle like this for a reason and we tell potential employees it’s going to be intense when we interview them.”

Skype, Tango’s biggest competitor, looks like a tortoise in comparison. Skype has consistently been slow to deliver new builds that work on all Android phones across the board. Interesting factoid: Microsoft asked Tango to be the first video chat app for Windows Phone 7 rather than soon-to-be-Microsoft-owned Skype. Tango will be available in the next few weeks for devices running the new Windows Phone Mango update.

Setton took some barbs during a moderated CTIA panel session for Tango not yet offering a way to monetize the service, but he told me and the crowd that the first paid feature with a subscription will arrive before the end of the year. He refused to even hint at what was coming.

“I’m not going to talk about it now, but we will have something ready by the holidays,” Setton said.

Setton said he expects the company to reach 100 million users by June 2012. Not only will the two-week cycles continue to be key, but the company also recently launched an application for PCs. No Mac application is available yet, but because Windows PC market share is so much higher, it’s somewhat understandable.

“We originally didn’t plan to support PCs, but many of our best customers asked us for it, so we launched that,” Setton said. “And that adds a potential 1.5 billion devices worldwide to use Tango.”

Thus far, Tango has earned $47 million in funding from two rounds. Its most recent round was in July with $42 million in funding led by Draper Fisher Jurveston. Other Tango investors include Bill Hambrecht, Michael Birch, Bill Tai and Daniel Scheinman.