Tango is releasing its first internally produced game for its own mobile messaging network. Road Riot for Tango is available today on Android. The classic arcade-style game could reach as many as 130 million Tango members across the world. 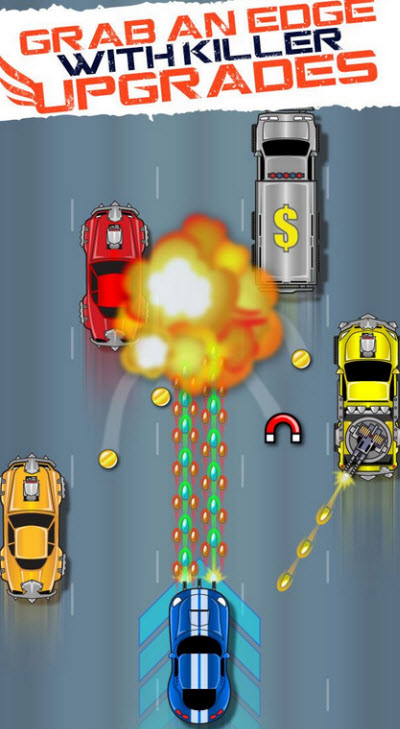 Above: Blast other cars as you dash for the finish line in Road Riot.

Mountain View, Calif.-based Tango built itself as a mobile messaging network to replace the older SMS text messages. But it has seen the success of games on messaging platforms in Asia, such as Kakao in South Korea and Line in Japan. These companies have launched games on top of their mobile messaging networks, and these games are turning out to be some of the best moneymakers in the world. That’s because friends freely share the games with others, reducing the amount that game makers spend on advertising. And because the networks make it simple to spend money, the games tend to monetize exceedingly well.

Aiming to duplicate that success in the West, Tango launched its game platform on June 6 and is now operating on both iOS and Android. It started with two games and now it has four more. Available for iOS are Gameloft’s Candy Clock Breaker for Tango, Jetpack Jinx for Tango, and Dream Bakery for Tango. On Android, third-party game developers have released Roulette Live for Tango, Blackjack Live for Tango, and now Road Riot for Tango.

“We decided the best way to understand the challenges the game developers are finding was to make a game of our own,” said Eric Setton, the chief technology officer at Tango, in an interview with GamesBeat. “We built a showcase for how to integrate your game with Tango.”

Road Riot for Tango is a nod to the classic arcade game Spy Hunter. It is an original title developed by Tango’s game development studio in Austin, Texas. In Road Riot, you race other cars and shoot them at the same time. You have to dodge other cars, gunfire, and missiles as you race down a highway. Players can compete with friends for rankings on the weekly leaderboards, broadcast their bragging rights over the Tango network, and invite people to play via Tango message or SMS text. Road Riot has 30 missions and daily challenges. Cannons and armor have 15 levels. You can customize your car with six different paint jobs, and you can power up with nitrous boosters, double weapon mounts, repair kits, and powerful loot magnets.

Setton said that 20 games to 40 games will come out on Tango before the end of the year.

“We are very happy with the progress,” Setton said. “The developers are happy.”

“The cost of user acquisition is just through the roof,” Setton said. “With 800,000 apps in the store, it’s difficult to get noticed if you don’t have the cross-promotion power of a network behind you. EA has enormous power with 900 games on the store. Small developers don’t have that power.”

The problem with advertising to get more players is that the process isn’t that transparent, and you never really know if you’re getting players in an efficient way, Setton said.

“Tango minigames have always been very popular within the Tango app,” said Richard Rabbat, the head of platform at Tango. “We are thrilled to pay homage to a classic game with a huge fan base and bring the exciting arcade experience straight to Tango member’s fingertips. We love that casual experiences like these games are giving loved ones more opportunities to bond over special moments and promote ongoing interactions.”

Road Riot will be available on iOS soon. Tango was founded in 2009.