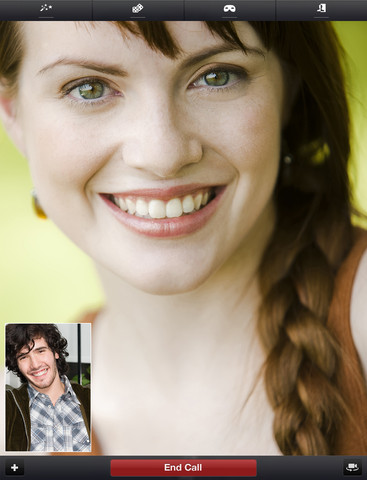 Watch out, Skype. Tango’s video chat is gaining on you.

Tango announced today that it has surpassed 100 million registered users. To celebrate, the company is launching a revamped version of its mobile apps, which finally bring full iPad support for iOS and an updated design. The iPhone version has also added photo editing capabilities, powered by New York City’s Aviary.

“It’s a little bit like boiling water, you see it coming for a while,” said Tango chief technology officer Eric Setton in an interview with VentureBeat, referring to the company’s approach to 100 million users. “It’s also a great way to get more engineers into the company,” he added.

Tango isn’t discussing specifics about active users, but the company told me last July that around 40 percent of its users were active. Setton noted that figure has pretty much held steady.

The company started out with a cross-platform video chat app for iPhone and Android but it has since added more platforms, like Windows Phone and Windows PCs, as well as just about every messaging media you can imagine. Back in November Tango added Instagram-like photo filters and cute animal avatars.

The new app finally offers an iPad-optimized experience, which means Tango can finally take full advantage of the tablet’s bigger screen. Setton noted that iPad users with sufficient Internet speeds will have a higher level of video chat quality than other users. When it comes to Android apps, he said that Tango already scales well to most of them, though the company is considering a fully optimized Android slate version if there’s enough demand.

Setton has long dreamed of simply displaying the video during a call, without any other on-screen distractions, something that the new app finally makes possible. Tango has also added hundreds of new filters, animations, and avatars, as well as a complete version of Othello within the app. The iPhone photo editing suite offers just about every editing tool you’d need, and it’ll eventually make its way to Android.

The company isn’t slowing down with its crazy two-week development cycle, Setton said:

Tango now has almost 20 engineers working across two development teams in China, and around a dozen dev teams all over the world. The company just recently opened up a small office in Austin, Texas focusing on game-related content. Tango also recently moved to a larger main office in Mountain View, Calif.

“I can probably not count all the lessons,” Setton said, when I asked what the company had learned on its journey to 100 million users. “One of the things that echoes is it’s so much easier when you work on a service that you yourself are using every day…. It’s changed the way we interact with our close circle, that makes us even more proud.”