TaskRabbit wants to help you get your tasks done faster than ever before. The company has redesigned its iOS app to focus more on real-time services. It promises to pair you with a “Tasker” within five minutes of your request, and assures you that your task will now be attended to in less than 90 minutes (as compared to a few days). And although it’s all about immediate task gratification, TaskRabbit still offers scheduled requests for those who prefer to plan in advance.

A service to help you outsource small jobs and tasks, TaskRabbit pivoted its offering in 2014 — removing the bid-pricing model in favor of on-demand requests for cleaning, handiwork, moving, and errands. For nearly two years, users could post a task and get it confirmed in the same day. Taskers would have it completed “in the near future,” which the company said was generally 1 to 3 days. 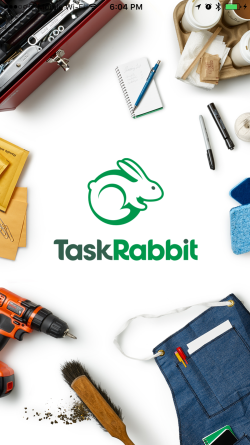 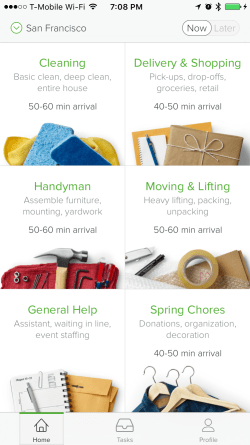 Its on-demand scheduling model appears to have worked in TaskRabbit’s favor, leading to considerable growth on the platform, according to John Vars, the company’s chief product officer. He told VentureBeat that 2015 was an “incredible” year for the company, which saw its business revenue grow 4x and mobile usage increase 3x. What’s more, Vars said, TaskRabbit’s user base grew 340 percent year over year, and the number of monthly Taskers grow to 15,000. While these statistics look impressive, the company declined to provide more specific numbers, though it claims to be profitable this year.

But even during this period of rapid growth, TaskRabbit says it has continued to learn, “Despite the current app being about scheduling, we saw a lot of people trying to get tasks done sooner than three days out. People wanted to get it done the same day or sooner and the app wasn’t built for that,” Vars said. “There was a shift in behavior and saw the marketplace responding. Fifty percent of jobs were getting booked and completed within 90 minutes. We saw matches happening in under a minute for 80 percent of people for those who wanted jobs done right away and saw scheduling in the future a huge source of friction.” 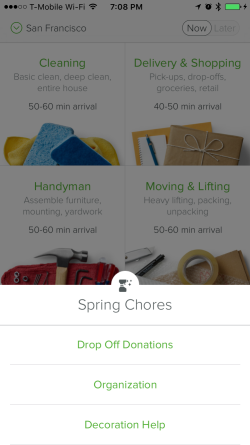 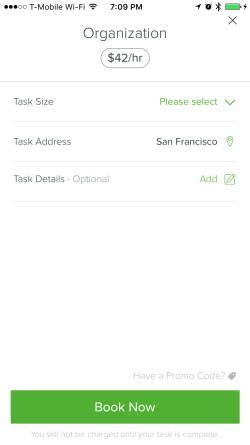 As a result, the company went heads down on an app that was “truly real time.” The redesigned app maintains its hourly pricing model, but also now lists Tasker arrival times. Featured at the top are two buttons that allow you to toggle between getting a job done now or later. Along with the tasks previously available in the last release, TaskRabbit has added spring cleaning (e.g. donating items, organizing homes, and decorating) along with general help (e.g. assistant, waiting in line, and event staffing) as things you can get done in under 90 minutes.

The company even touts the app’s improved matching capabilities that will pair you with a Tasker in under five minutes.

“We’re moving from on-demand to real time,” said Vars. “The next evolution of the TaskRabbit business makes us the only platform that delivers against getting everyday chores done immediately. We’re removing the friction and inefficiency of finding help, scheduling a mutually workable time, and having to wait to get something fixed, cleaned, or delivered.”

Only those on iOS will be able to immediately take advantage of TaskRabbit’s enhanced focus. The company plans to update its web client “when appropriate.” There is no timeline on when it’ll be available on Android.