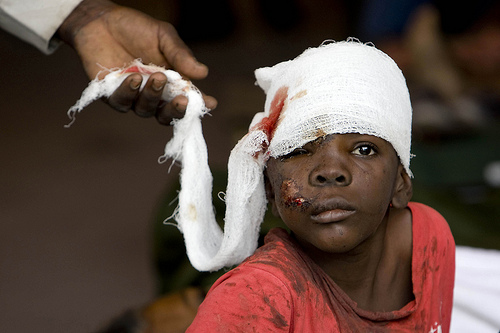 Haiti’s earthquake devastated not only lives. It destroyed whatever emergency services the barely functioning government had to offer. But in less than five days, a makeshift version of 911 sprung to life.

It’s a striking story of how a few tech-savvy social entrepreneurs, receptive ears in the U.S. government and hundreds of Haitian Creole-speaking strangers crowdsourced from around the world were able to help people on the ground get food or medical attention.

Hours after the earthquake struck Port-au-Prince, 23-year-old Josh Nesbit (pictured right), who heads a non-profit delivering health care in Sub-Saharan Africa through mobile phones, thought that an SMS gateway would be critical in Haiti.

He sent a tweet out asking for help. A Cameroonian managing a startup incubator in Africa, Jean Francis Ahanda, responded mentioning that a contact, Jean-Marc Castera, was headed to the command center of the Caribbean’s largest wireless carrier Digicel that day.

Within three days, they had co-opted a shortcode, 4636, that had been used for weather information in Haiti. They rushed to get several other partners like Ushahidi, which provides an open-source platform for tracking crisis communications, and Google on board. A non-profit that specializes in using technology for disaster relief, Instedd, built an emergency information system using the shortcode. On a very late Saturday night, a cobbled-together team of a half-dozen organizations or so launched ‘4636’ as an emergency number.

They started publicizing it on the ground in Haiti through radio stations. Haitians could text the number with messages about injuries, people trapped under rubble or reports of missing people.

Some of them are desperate (identifying information redacted):

Two San Francisco-based startups, Crowdflower and Samasource, came on-board to help find volunteers to translate and categorize the messages. Both are in the “Mechanical Turk” space — they farm out simple, rote tasks that computing can’t solve to thousands of people at a time. (Crowdflower is a venture-backed startup, while Samasource is a non-profit that gives this work to refugees and people in the poorest parts of the world, including Haiti.)

Crowdflower and Samasource asked for people around the world fluent in Haitian-Creole to translate and prioritize emergency texts coming out of Haiti. So far, a few hundred have signed up. (See the map below or a live version here.) Nesbit admits the privacy situation isn’t perfect, but the project helps people in dire need and their details disappear from public view once translated.

Another contact, Katie Stanton, who was an early Google employee and now works in the Office of Innovation at the State Department, helped get emergency responders from the U.S. Coast Guard and Red Cross involved. 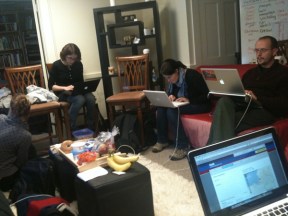 Now if a Haitian texts 4636, a stranger on the other side of the world will translate it and other volunteers (pictured right) will send it to the right responder whether it’s an urgent medical need or a general request for more food and water. Volume has risen to about 2,500 messages a day since the Jan. 16 launch and messages are usually translated and forwarded in 2 – 10 minutes. They’ve filtered through more than 20,000 texts so far.

In some cases, it’s been life-saving. Earlier this week, a Haitian woman went into labor and started bleeding out. She texted 4636, calling for help. Volunteers pinpointed her location on a map, giving the U.S. Coast Guard her coordinates. They were able to reach her in time to help her deliver the baby.

The non-profits behind ‘4636’ are now trying to scale it up as the number of messages rises 10 percent a day. They’re also trying to make it more sustainable with larger pools of consistent volunteers.

“Honestly, this is rare to see groups like the State Department, Ushahidi and Instedd all working together,” Nesbit said. “I hope it doesn’t take another catastrophe to see this type of collaboration again. The bright spot in all of this is seeing the tech community take ownership.”

True, but the more intriguing part of the story may be that this all started with a simple tweet. In fact, Nesbit never set foot in Haiti. 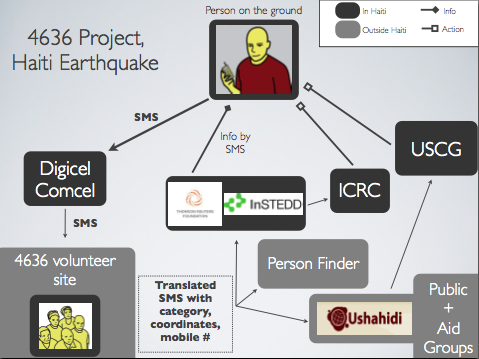